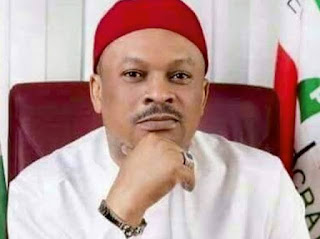 All keen observers never saw this coming, even political pundits were taken unawares, but the fact remain, that if the press release by Ali Odefa, the National Vice Chairman, PDP, Southeast Zone, is anything to go by, Sen. Samuel Anyanwu popularly known as Sam Daddy, has set the stage for a successful take over of the party structure, not just in the State, but eventually, in the Southeast and beyond. That press release had in it, a note of gloating, as it says the emergence of Sam Daddy was a display of maturity!

As an unabashed Saraki ally, and a notable Wike camper, it goes without saying that Sam Daddy has got all the aces he needs to not only get his pound of flesh from the Mbutu born, supreme court sacked politician, but also to see to it that dead things stay dead!

We live in a short memory country, but it is still fresh in many a mind, that within the 7 months' misadventure of Ihedioha in Imo State, he tried his best to, literally, set fire on all sectors of the state, simultaneously. He was in hot pursuit of everyone and anyone who has as much as disagreed or even argued with him, in the past.

It will be recalled that the Ihedioha set out to frustrate Sam Daddy in the party, by not only ostracising his loyalists but also, declaring him expelled from the party, eventually.

It is no gainsaying, therefore, that his emergence will definitely unsettle not just Ihedioha but also Sen. Ezenwa Onyewuchi, his successor in the Red Chambers, who has seen the signs, and quickly resorted to all manner outlandish stunts, including the pictures of him in a barbers’ shop, which trended recently.

Remarkably, it takes scenarios like this to give impetus to those who have previously been dying slowly, under the Ihedioha leadership, to muster courage and not only speak up against his disadvantages, in the party but also join forces to ensure that his ambition never sees the light of day.

As soccer fans say, “The Silence in Ihedioha Camp, Since Yesterday, is Proudly Sponsored by Sam Daddy.”