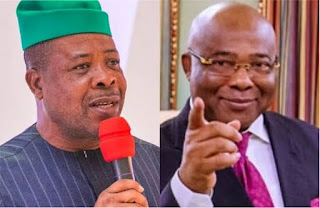 .......Asks him to Drag Emeka Ihedioha to Court

In a press release made avaliable to newsmen in Owerri the group said that " Recent utterances of a former Government House squatter, Mr. Emeka Ihedioha, have constrained us to request your prompt action, Sir, before lunatics take over the asylum."

The group said that "At the PDP'S Secretariat on Wednesday 5 January 2022, Emeka, despite knowing them to be false, pronounced the following words before an excitable audience: “When I became Governor, we promised Imo people LGA autonomy and we did it, we ensured prompt payment of salaries and pensions, we revived agriculture in the state, our IGR recorded a major boost, we improved the rating of Imo State in terms of ease-of-doing-business and corruption index, there was massive construction of roads across the state, the LG administration was working again, likewise every other institution in the state. We did all these things and more within a short period of time and we would have done many more by now."

Continuing the group said that Emeka Ihedioha was quoted to have said that "It is however, unfortunate that these milestones have been halted and abandoned in the state today. My assurance is that we shall bounce back”.

"Your Excellency, we are gravely worried that such deceit could come from a man who not only is supposed to be a Knight of the Church, but a serial aspirant to the high office of Governor."

"You know, even more than we do, that Emeka, himself a squatter, had the audacity to mobilise thugs to 'evict' elected local government executives at the outset of his ill-fated interregnum just to make room for his lackeys. Not only did he remote-control this so-called Interim Management Committees (IMCs), he programmed all manner of illegal remittances to himself, and further appointed himself executive consultant designing meaningless but overquoted projects, awarding contracts on implulse to the tune of billions of scarce Naira."

They begged the goverment of Senator Hope Uzodinma to act on behalf of several worried and wounded Imo sons and daughters who have shared with their revulsion at Emeka Ihedioha's hypocrisy and the danger it portends if not nipped in the bud.

"Thinking he was a smart guy," a former close aide to Emeka confided in us, "Ihedioha in connivance with two of his principal staff then, craftily designed a mechanism which was more akin to 'the more you look, the less you see'". He was said to be fleecing local government funds, and at the same time, heaping blames on former Governor Rochas Okorocha, whom he knows has acquired a pariah status in Imo, such that any accusation he (Ihedioha) heaped on him (Okorocha) was easily swallowed hook, line and sinker by the people."

According to him, "We have records of particular local government Chairmen under Ihedioha, who reported every morning to the office of the Chief of Staff to Ihedioha before going to work. Same is also repeated at the close of work each day. This is when illegal returns are made daily as directed. No local government Chairman spent a kobo without approval from Ihedioha. Where then lies the autonomy?" The statement reads.

"Our dear governor, as if you knew, you announced at the 6th edition of your stakholders' meeting/luncheon that you will soon implement the report of the Judicial Panel of Inquiry into Public Contracts. We ernestly look forward to it. But do not forget, Sir, that even the Chief Barr. Eze Duruiheoma-led committee Emeka set up to carry out a forensic audit of the accounts of the 27 LGAs also indicted him of gross misappropriation of LG funds."

The group recalled that Emeka Ihedioha withheld and hoarded workers salaries for four out of his risible seven and a half months in power using a spurious automation process as alibi. Imo workers would like to know what he did with their sweat.

"Mr. Emeka told those poor people that he built roads. Oh, what a lie! As you know, Sir, Emeka only perfomed flagoffs. He was more interested in the hype, the flamboyance, the razzmatazz, noise, instant gratification and echo of 'yes men'. Besides asphalting one half of the 100 metres Spur off Concorde Boulevard leading to Immaculate Hotel, and his residence at the Civic Center, Emeka lacked the discipline to complete any road."

On December 29, 2019, at exactly 7 months in illegal occupation, Emeka was said to have spent over N900m (Nine Hundred Million Naira) acquiring a chieftaincy title from Oguta and didn't give a damn about Imo, the group alleged.

"Your Excellency, billions vanished through Emeka's alleged unchallenged stealing. It is not for nothing that our people now say that had Providence not retired Emeka, his kleptomania would have dwarfed that of Sen. Rochas Okorocha."

"This is no exaggeration, Sir. Emeka took a knife to Imo's wrist and slit it. While Imo bled under his watch, he positioned himself as a 'man of the people' through relentless propaganda. Today he tools about town stooling lies. If he has no shame, has he no conscience?

"On account of these revelations and accompanying proofs to corroborate them, puting Emeka on trial should therefore be a breeze, Your Excellency. But knowing Emeka, he will gamble on the possibility that a section of the misinformed public will create a media storm should he be dragged before the law, therefore his perjury grows bolder by day. Actually, Emeka should be seized and arraigned immediately, Sir. Each day of seeming legal inaction from the state arms Emeka with a false sense of invincibility and a license to sow greater mischief, falsehood and hate in the hearts of our people. Who knows where this could lead?

"We are persuaded that unless this man is summoned to account for his travesty, he will continue to give people the false impression that he is a victim when in fact he is the villain. Your Excellency, on this matter, we urge you to please act expeditiously. The group concluded