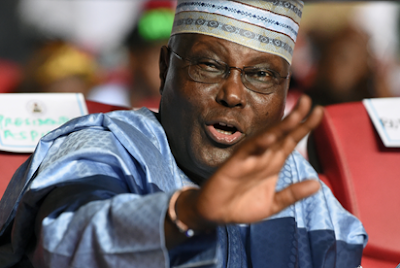 Peoples Democratic Party (PDP) presidential candidate Atiku Abubakar, believed to be a multi-billionaire has declared a paltry yearly personal income of N20 million. The shocking revelation was contained in the credentials that Atiku filed with the the Independent National Electoral Commission (INEC).
The PDP candidate, who prides himself as a businessman and job creator said he earned only N60.2 million in three years and paid a paltry N10.8 million tax between 2015 and 2017. Some reports have estimated Atiku’s wealth at about $1.4 billion. In 2014, Atiku boasted that he was the greatest employer of labour in Nigeria, with about 50,000 Nigerians on his payroll. “As an individual, I believe my record in employing young Nigerians is unrivalled by any single private investor in Nigeria,” the former vice president said. He has investments in media, shipping, education, and other sectors.

One of the companies, where he has substantial interest is Intels, which recently ran into trouble with the Nigerian government for not remitting revenue due to the Nigerian treasury. He is also the founder of American University in Yola and has a chain of schools under ABTI brand. He owns Prodeco, a property development company and Prodeco International, operating in Oil & Gas Free Zones. Prodeco, founded in 1996, engages in building, marine, and infrastructural construction in the oil and gas industry. He also has interest in agriculture, with Atiku Abubakar Farms.

The PDP candidate’s credentials indicate his highest educational qualification as a Diploma in Law of 1969 from the Ahmadu Bello University (ABU). President Muhammadu Buhari, in an affidavit to support his form, said his credentials are still with the military. In the sworn affidavit, the President, who is the candidate of the All Progressives Congress (APC), said: “I am the above-named person and the deponent of this affidavit herein. All my academic qualification documents as filled in my Presidential form, APC/001/2015 are currently with the Secretary of the Military Board as of the time of this affidavit.”