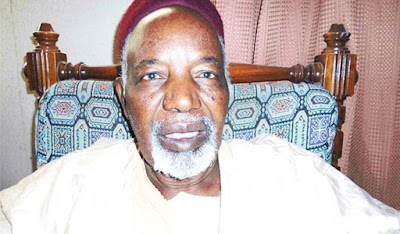 A former governor of Old Kaduna State, Alhaji Balarabe Musa, on Monday urged Nigerians not to gamble with the idea of returning the People’s Democratic Party (PDP) and its candidate, Atiku Abubakar to power in 2019.
Musa told the News Agency of Nigeria (NAN) on telephone from Kaduna that the country would be worse off if the main opposition party was allowed to come back.
He said the PDP had ruled the country for 16 years before 2015 and all they brought to Nigerians was misery and underdevelopment.
Musa said that the opposition party almost completely ruined the economy with massive corruption and plunder while in power.
The governor said though all is not well with the country under the present All Progressives Congress (APC)-led government, Nigerians should never risk having any hope in the PDP to make things better.
Musa said that the PDP lacked the moral right to ask for a return to power, and a credible alternative was needed to turn things around in the country.
“I do not understand the hype about PDP returning to power. I just do not understand. Return to do what? The party that created many problems for 16 years while they were in power? No way!
“Things are not too good at the country at the moment, but I think the country would be worse if the PDP is allowed to return. We saw what they did for 16years and they will definitely mess things up further.
“Nigerians should not trust the PDP with power. We will be disappointed.What we need in the country right now is a credible alternative that would deliver good governance and respond to our needs,” he said.
Musa said that money had over the years influenced Nigerian politics, resulting in the emergence of unpopular leaders.
The former governor said Nigerians must be prepared to change the narrative by voting according to their conscience in 2019 and beyond.
He said the country was currently faced with a number security and economic challenges, among others, calling for government’s creative intervention to address.
Musa suggested the economic restructuring of the country to bring back privatised public corporations to government control for provision of more efficient services to the people.
The former governor said the economy was being controlled by the private sector which was ripping off the people with poor service delivery.
Email Post