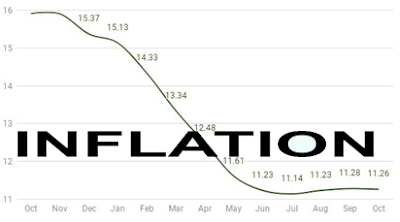 On food inflation, the report noted: “The composite food index rose by 13.28 percent in October 2018 compared to 13.31 percent in September 2018. This rise in the food index was caused by increases in prices of fruits, meat, vegetables, potatoes, yam and other tubers, bread and cereals, and oils and fats. “On MoM basis, the food sub-index increased by 0.82 percent in October 2018, from 1.00 percent recorded in September.” The report further stated: “In October 2018, food inflation on a year-on-year basis was highest in Bayelsa (16.36 percent), Abuja (15.85 percent) and Taraba (15.27 percent), while Bauchi (12.17 percent), Oyo (11.76 percent) and Plateau (11.36 percent) recorded the slowest rise in food inflation.

On month on month basis however, October 2018 food inflation was highest in Kogi (2.28 percent), Plateau (2.42 percent) and Nasarawa (2.17 percent), while Akwa Ibom, Benue, Kwara and Ondo all recorded food price deflation or negative inflation (general decrease in the general price level of goods and services or a negative inflation rate) in October 2018.” Core inflation was 9.90 percent YoY during the review period, against 9.80 percent in September. The highest increases were reported in the prices of fuel and lubricants, vehicle spare parts, domestic and household services, carpets and other floor coverings, dental services, hospital services.

On a MoM basis, the core index increased at a faster pace of 0.80 percent, three bps below the 0.6percent reported in September. Analysts’ comments According to analysts at Cordros Capital, a Lagos based investment firm: “The data came in seven bases points, bps below our forecast of 11.33 percent YoY and eight bases points, bps above Bloomberg compiled average estimate of 11.34 percent YoY.” Also, analysts at Vetiva Capital Management said: “Nigeria’s October inflation came in at 11.3 percent YoY, in line with the September figure and Vetiva estimate, but slightly below consensus projection of 11.4 percent YoY. On their part, analysts at the United Capital PLC, said: “The slowdown in the food inflation sub-index can be attributed to increased supply of agricultural produce in the run-up to the month in view, especially as we move deeper into the harvest season and cases of farmland flooding have waned. Meanwhile, the mild uptick in the YoY core inflation sub-index amid renewed pressure on m/m rates (up 20bps to 0.83 percent in October) can be attributed to faster rise in the prices of fuel and lubricants, vehicle spare parts, domestic & household services, carpets & other floor coverings, dental services, hospital services, repair of household appliances and medical services, during the review period. Inflation projections for November Speaking further, analysts at the United Capital PLC, said: “Looking ahead, we expect the food inflation sub-index to rise marginally as the anticipated increase in the supply of food product is expected to be offset by increased demand.

On the supply side, the declining incidence of farmer-herder crisis and farmland flooding is positive for supply, especially as we approach the peak harvest season. However, demand is expected to increase as we approach the festive period. Thus, we expect m/m food inflation to rise slightly by 0.84 percent in November, 2018. Elsewhere, campaign related spending recorded during November may pressure the core inflation sub-index higher to 0.85 percent in November. On a balance of these factors, we expect headline inflation to inch higher, rising to 11.32 percent in November”. In their forecast for November inflation rate, analysts at Vetiva Capital Management said: “Despite the stickiness in recent inflation figures (six-month average: 11.3 percent YoY ), approaching headwinds dampen our optimism of Nigeria’s pricing environment. “Firstly, election spending is expected to exert demand-pull inflation, and members of the Central Bank of Nigeria’s interest rate-setting committee have already expressed concern over excess liquidity heading into the election. In particular, the rise in M3 (a new measure of broad money) above prudential thresholds, which poses a risk to inflation. In addition, a minimum wage hike remains likely and could lead to a wage-price spiral in the economy. Amid all of these, our expectations for the rest of the year are unchanged -11.4 percent YoY in November and 12.2 percent YoY average for 2018, but we expect inflation to trend higher in 2019, on the back of the aforementioned factors.”
Credits: Vanguard