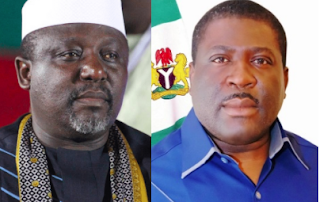 An Imo State High Court, presided over by Hon. Justice Kemakolam A. Ojiako, Wednesday, upheld the prayers of the Deputy Governor, Prince Eze Madumere, and quashed the purported gubernatorial primary allegedly held on October 6, 2018, by the Governor Rochas Okorocha faction of the All Progressives Congress, APC, in the state. This development came as the Governor, his son in-law, Mr. Uche Nwosu and their supporters continue to sulk over the political humiliation they suffered in the hands of the APC Coalition Force, during the October 1, 2018, gubernatorial primary.

Okorocha and Madumere Justice Ojiako granted all the prayers sought by Prince Madumere, including the prayer that the October 1, 2018, APC primary election was credible, relevant and meets the parameters for the exercise. Madumere also urged the court to hold that the contestants, except the Governor’s son in-law, have since, accepted that the October 1, 2018, party primary, was the only relevant and valid primary electioneering process, through which Senator Hope Uzodinma emerged winner.

Justice Ojiako equally upheld that the judgement was based on the subsisting Order of the Court, granted by Abuja High Court, restraining the party from conducting any fresh primary elections until the determination of the matter before it over October 1, 2018 primary election. He therefore ruled that the defiance of the Agbakabia-led committee was only an effort in futility, if not an affront to the extant laws guiding court processes.

Speaking to Vanguard on phone, the Deputy Governor said “with today’s (yesterday) judgment, the foundation upon which Mr. Nwosu is defiantly parading himself as the governorship candidate of APC, Imo State, has been quashed”. Continuing, Madumere further opined that ” this has laid to rest, all Okorocha and son-in-law’s claims over who the standard bearer of the party is”. Vanguard recalls that since the emergence of Senator Hope Uzodinma as the standard bearer of All Progressives Congress, Governor Okorocha and his heir apparent son-in-law, Mr. Nwosu have been claiming victory and going about calling the National Chairman of APC, Comrade Adams Oshiomole names, as well as accusing him of compromising the process to favour Senator Hope Uzodinma. Meanwhile, Comrade Oshiomole had accused Governor Okorocha of wanting him to compromise the primary election process in Imo so as to help him build a family political dynasty.