Labour to demand for areas of minimum wage 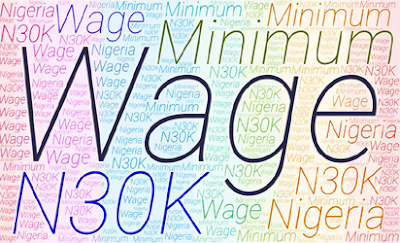 THE organised labour Wednesday hinted that it has the plan to demand for two years areas of the new national minimum wage for workers in the country. President of Nigeria Labour Congress, NLC, Ayuba Wabba dropped the hint when he received the General Secretary of the Public Service International, Mrs Rosa Pavanelli, in his office in Abuja. Wabba who said that the delay by President Muhammadu Buhari to transmit the executive bill to the National Assembly was worrisome, noted that the organided labour had already called on the President to immediately forward the bill to the National Assembly. minimum wage minimum wage He said that workers in the country had made tremendous sacrifice, adding, “I think going forward, we are going to demand for arrears of that two years we have lost. “Because I think with all fairness and justices, going forward as they are going out to campaign we will also go out to campaign for our minimum wage. “I also want to inform you that we have passed the first hurdle and it took us almost a year to be at the Tripartite negotiating table for a figure and we have agreed on a figure of N30, 000. “That figure has been transmitted to the Mr President who set up the committee and we have also told them to forward an executive bill immediately to the National Assembly. “We are not unaware of the new tactics by the state governors to try to arm-twist what has already being done.” Wabba however explained that six state governors were part of the negotiation process and each of them represented each of the geopolitical zones. He also noted that public hearing was also held in the zones where the state governors were also invited to present their inputs and also a letter was written to each of the governors to send in their memoranda, saying that 21 states complied.
The NLC president said 21 state governors had earlier quoted figures and some were higher than even the agreed figure and also was the same with the Organised Private Sector. He said, “So, mutually on the negotiation table, we have looked at all other factors, especially factors that were provided in convention 131 and 95 of the International Labour Organisation on the Minimum Wage in which five factors were considered. “The issue of the purchasing power parity, inflation, ability to pay, all those factors were considered and that is how our demand of N66, 500 was then agreed mutually on N30, 000. “So, workers have made enough sacrifices as we have lost already two years.” Wabba condemned the plan to privatize the Pension Fund Administration, saying it was another twist by multinationals to try to access funds that they were not part off. He said that NLC had carried out various campaigns in the support of the fight against corruption and also the whist blower’s policy, in order to ensure good governance in the country. Wabba commended the PSI General Secretary, for her visit in order to show solidary to the Nigerian workers. Speaking earlier, the PSI General Secretary, Mrs. Rosa Pavanelli, said she was in Nigeria to show support for the Trade union movement in Nigeria. Panvanelli said workers in the public service were faced with a lot of challenges especially in Nigeria. She said, “Working for months, providing services to people without being paid is something that is unacceptable and this unfortunately what is happening here. “In a country which is rich of resources that can have wealth distribute but it is oppressed by the greater international capital that want to grab the resources and forget the people who create wealth for the country. “This is very wrong and unacceptable, we must ensure good governance, social justice for the Nigerian workers, we will support you anytime you call on us.” She also stated that PSI also in Nigeria to fashion out ways of assisting the Internally Displace Person(IDPs) in the country.