There is no division among stakeholders in NASPA- Hon Obinna Okechukwu. 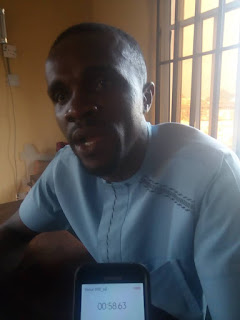 In this interview, with Hon. Obinna Okechukwu, the second Vice President ASAMTA, he takes time to explain the role of ASAMTA in all the 66 markets in the state, and their efforts in bringing sanity in the markets. He also highlights on what is currently happening in NASPA with regards to the said hear say about divisions among stakeholders in the market.

A: I am Hon. Obinna Okechukwu, the Second Vice President ASAMTA. I am also the caretaker Chairman of New Motorcycle Spare Parts Association Nnewi.

Q: Please can you tell us what ASMATA has achieved since it's creation by Anambra State Government??

Ans: I am happy to inform you that our administration is moving on fine. You know it's good for governance to change hands, so that new innovations and changes can take place, as that is what government should be. Our administration since inception is progressing and our president general Comrade Ikechukwu Ekwegbalu is doing fine, as he is a rare brand who has been tried and tested. Coming to your question proper, I want to inform you that we have made positive changes, which include, keeping the market clean, making sure that the Police does not just come to the market based on frivolous invitations to disturb traders. We have mapped out measures to ensure peace in most markets in the state where there was no peace, which is yielding results. We as a new administration also brought out a task force saddled with the responsibility to stop unnecessary tolls and levies that was formally been collected. I can assure you that call illegal tolls and  levies have been  stopped, and the traders in Onitsha, Nnewi and environs are happy about it, which has brought back active commercial activities in the state without molestation again.

Q: What Assurance are you giving to Anambrains, that the issue of touting is over with regards to the collection of tolls and levies in the state.

A: The assurance we are giving them is that, they should come back to start their commercial activities again, because ASMATA has abolished all illegal tolls and levies, that was been collected from them in the past, which severed as a nightmare and terror to them. We also assure them that the era of multiple taxation in Anambra state is gone, as it can not happen again, because we at ASMATA has stopped it. It is on record that the government of Anambra state has made it easy for traders to pay the normal fee which is stipulated as revenue, which constiute IGR. Let it be known also that no functions without IGR, so what is in place now is government recognized levies.

Q: Do you think it's necessary for traders to pay IGR?

A: We all know that Chief Willie Obiano, the governor of Anambra state is working, and when you look around the state, you will see his developmental strides in security apparatus, lighting of all the major roads in the state, construction of new roads and repair of old ones, up to date payment of civil servants in the state, to mention but few. It is with IGR that all these things are made possible, so I call on Anambrains to endevour to pay their tax as at when due especially traders in the state. I urge traders to pay their tax to government as government has not increased tax in the state as it is still 12,200 per year for every government owned market.

Q: This 12,200 is there a particular category of traders that pay it or is it for all traders?

A: The 12,200 is for markets owned by Anambra state government, because there are markets that government do not have full hold on. This fee is paid once every year, so I call on traders in Anambra to always pay their tax, so that government will see funds to work for the people of the state.

Q: As Caretaker Chairman of NASPA Nnewi, can you intimate Anambrains on the state of the market.

A: We thank God for his grace so far in the market. When we were given the mantle to lead NASPA, most people never believed that we will be able to achieve any success, but we thank God for the success achieved so far, because we have changed the face of the market for good. When there was issues in NASPA because of election fracas, our governor called the attention of major stakeholders in Nnewi in the Persons of Chief  Innocent Chukwuma (Ifediaso Nnewi) Lady Binaca Cousins and others who came to the rescue and made sure there was peace by setting up  a  caretaker for NASPA.
When I came into the market I started with the payment of debts owed people. We came in to make peace and found out that why election always poised a problem was because people saw it as a means of enriching themselves, which made it a do or die affair, because of the money involved. We have succeed in making people to understand that any body that is going to lead the market after us must be willing to keep the market clean and levies will not be contributed for them  to clean the market, rather the person must work hard with available funds at his disposal. The person must be willing to clean the gutters and other things that needs to be done in the market. It is because we are working, that is why people in the market are happy. If you go around you will see the parks we have built and even the one they are dragging, and the one they said they paid 100,000 naira, I have gotten it from them and have put all of them to use. We still trying to bring order and sanity in the market for Nkwo Nnewi to be up to the standard deserving of the market. For now we are still working and once we finish an election will be conducted for NASPA.

Q: Can you tell us what you have done in the market for people to be commending you.

A: When we came into the market, we saw how the market was and we started paying those that were owed in the market because most of the jobs that was done in the market was through borrowing. I sincerely commend people like Chief Dr Innocent Chukwuma, Betty Moore (IBK) and others who brought their money and we started paying the money owed the Union. We went to EEDC and they gave us Pre Paid meter and we paid over 22 million, we were owing, this brought happiness in the market. We continued by renovating the parks , which stopped the issue of heavy duty trucks been stuck in the market, as it used it be before. We also built the roads inside the market which lead to easy access within the market. We went on to desilt the gutters which ensured that shops in the market were not flooded as it used to be in the past. In all this, if we have issues with funding we meet the stakeholders who in time come to our rescue. We also wrote to MTN to help with telecommunication mast to improve network in the market to aid communcation and that has been done and we have sound network in the market now. You know that alll work and no play makes Jack a dull boy, so we brought on board a football competition for all the zones in the market and by God's grace the grand finale will be on the 25th of August 2019. Why the people are happy in the market is because we are doing the right thing, and that is why there is peace and calm in NASPA.

Q: Is there division among stakeholders in NASPA.

Q: Is there any pending court cases in NASPA?

A: When I came on board as the caretaker chairman of NASPA, there were many court cases here and there, but I made sure that I closed all of them, and as at today, there is no Court case in NASPA unless people who went to court unknowingly but when we resolve it for them, they bring the matter out of court. I stand to be corrected, I remain the only chairman so far that does not have any issue with anybody whatsoever.

Q: Why do SARS sometimes enter the market in Nnewi, mostly from Ichi???

A: Most of the police you see enter the market, usually come to the union office to report the matter and we ask them to go that after looking at the case, we settle the matter or bring it to them if its a matter of robbery or kidnapping.

Q: How do you appreciate the efforts of stakeholders in the market.

A: The appreciation I have for stakeholders in the market is prayers, that God will continue to bless them, so that they will sell their goods and buy another one, because since I came on board, everyone has been having good sales, because I made sure that wealth in the market is now evenly distributed and everyone that imports now makes sales. I also helped our trade in the market by making sure that every importer registered a special quality. I want to in a special way thank Chief Willie Obiano( Akpokudike Global) for for finding me worthy to be a member of ASMATA and also Chief Innocent Chukwuma(Ifediaso Nnewi) for finding me worthy to man the affairs of NASPA in Nnewi. I want to thank GUO, Oglilisi Igbo, Betty Moore and all traders in Anambra especially NASPA, I pray that God will continue to bless them.
Email Post