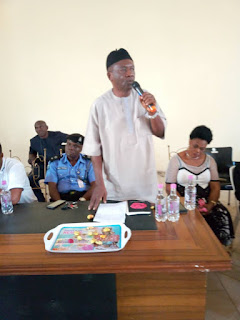 The IMC Chairman of Ikeduru, Dr A.C Oparah has expressed satisfaction on the appointment of Ikeduru indigenes into key  positions by H.E Emeka Ihedioha's administration. He also highlighted that he has  a good working relationship with the Honourable Member representing Ikeduru LGA, at the State House of Assembly, Amb. Uche Ogbuagu, and  Commissioner for Lands, Survey and Urban Planning, Sir Bon Unachukwu, who are all Senior Govt Appointees from Ikeduru.

The Ikeduru LGA IMC Chairman,  Dr. A.C Opara, however tasked stakeholders in the LGA to look inwards towards  development in the area.

While his presenting remarks and scorecard of his committee, he thanked Ikeduru Leaders and Stakeholders for finding time to attend the  stakeholders meeting.

Dr. Opara informed the Stakeholders of signature projects of the sate Government, across  27 LGAs in the state which includes,  Construction of Iho Stadium,  building of new Office/ LGA Secretariat.

The IMC Chairman went further to inform the Stakeholders of Her Excellency's wife upcoming visit to Ikeduru LGA which will come up on 26th of August, 2019 and urged stakeholders to support women in their ongoing august meeting.

The Chairman also informed the stakeholders of the need to buy road construction Equipments which will be owned by the LGA to assist in the issue of Infrastructural development and assured them to be patient with the state government until the end of the raining season, because of the state of roads in Ikeduru.

He further said  "We are partnering with SUBEB to build one primary School block each across the 12 wards in Ikeduru LGA, including health centers , borehole, electrification of some stratagic places Within the LGA with Solar Power energy".

The Chairman on behalf of the LGA Interim Management Committee outlined their budget in view, in synergy with State Government, which includes but not limited to Buying Construction Equipments, Building one primary school block each across the 12 wards in the LGA, Building/Reactivating Health Centers , Boreholes where necessary , Providing Solar energy at some strategic places within the LGA, One Road Construction in the LGA within one year, Sponsoring 20 youths of Ikeduru on Agro training, Compliance with the Compulsory State Govt monthly Sanitation Exercise in the LGA, provision of adequate security and the protection of life and property in the LGA, including facilitation of pension verification exercise within two weeks, massive renovation of the LGA secretariat, and building of Stadium at Iho to boost sports activities.

The New DPO Iho Division, CSP Prince Ivrogbor in his response speech promised to protect life and properties in Ikeduru as well reduce crime to it's barest minimum together with the assistance and cooperation of the community leaders and other stakeholders in the LGA.

Chief Ogueri, while addressing the Stakeholders, thanked the IMC. Chairman for applying due process in his dealings as the IMC Chairman Ikeduru LGA.

He thanked Governor Ihedioha for the appointment of some illustrious sons and daughters of Ikeduru as T.C Chairman, S.A Transport, Secretary ENTRACO Owerri Zone, Secretary Adapalm and Commissioner respectively.

Dr Charles Anukwa, Former T.C Chairman Ikeduru and one time PDP State Chairman advised the committee to continue with Projects that are meaningful to life and that will bring development and generate employment  for the youths in the LGA,  such as good roads , Primary Health Care, Agriculture, Education etc which will link Ikeduru East and West together. He also admonished the Chairman to continue to work hand in hand with other stake holders in their respective wards and remove any form of greed or selfishness.

The S.A Transport to the State Governor, Hon. Calistus Mbaoma urged the committee to focus more on good governance as the days of election is over. In his word, the task to rebuild Ikeduru is a collective effort, which will involve critical leaders across party line. He used the opportunity to thank Ikeduru people for their sacrifice in making sure the nepostic Government of the past administration was bundled out and Promised that the current govt will live up to expectation which every ikeduru  people will be proud off.

The IMC Chairman, Dr A.C Opara, in his vote of thanks, sincerely commended the stakeholders for their positive contributions and urged everyone to join hands in the rebuilding of Ikeduru and Imo at large.

The meeting recorded huge success and was graced with the presence of great, notable and illustrious Sons and Daughters of Ikeduru.
Email Post