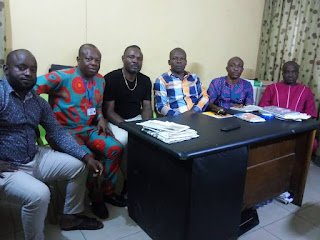 The leadership of the Anambra State Market Amalgamated Traders Association, ASMATA, the umbrella body of all the markets in Anambra state, has reechoed its stand on monthly prayers in all markets in the state as agreed in its meeting with all chairmen and stakeholders of different markets. The market body issued a stern warning that default to the new guideline will no longer be tolerated.

President General of ASMATA, Chief Ikechukwu Ekwegbalu, reechoed the warning on Monday, August 12, at the ASMATA headquarters in Onitsha, Anambra state, during an enlarged stakeholders meeting, which attracted all market leaders and ASMATA executive.

This medium reports that the purpose of the meeting was to reexamine activities in the various markets and proffer solution on the way forward.

The ASMATA PG said that one of the contending issues was violation of guideline for prayers in different markets. He said he received an intelligence that a section of the Bridge Head Market, known as Onitsha Drug International Market (aka Ogbogu) went against the directive and continued with their regular prayers.

He said, "We did not ban prayers in Anambra markets. What we did was to cut the prayer period to once per month, instead of having it regularly, so that traders will have time to do their businesses.

"When ASMATA committee came on board, many traders approached us complaining that constant prayers resulting in closure of markets were disturbing business activities. Based on that, we summoned a meeting of all market leaders in the state, where we presented the matter.

"At the end of the day, it was agreed among all stakeholders that prayers should be held once per month in all the markets. The reason was that we came to realise that constant closure of markets due to prayers had frustrated our customers, who subsequently diverted to other markets in Aba, Kano and Lagos.

"We subsequently directed all market chairmen to meet traders in their various markets and agree on suitable day they would be having the prayers every month; because, sticking to regular prayers will continue to impact negatively on the traders and the economy of the state.

"We do not barn daily Angelus prayers offered by 12 noon; we do not ban daily Divine Mercy prayers offered by 3pm. Individual traders, who want to have quiet time can pray in their shops; but we cannot condone daily prayers that will continue to frustrate business activities in Anambra markets."

Ekwegbalu insisted that ASMATA would abhor any form of opposition as regards the new directive, and tasked chairmen of markets to follow the directive up. He also said that the market body would summon defaulting prayer groups, especially the drug market evangelical group, for questioning.

In a related development, the leadership of the Bridge Head Drug Market, Onitsha, same Monday, summoned an emergency crucial meeting of all stakeholders in the market to thrash out issues over the insistence of the evangelical group in the market to continue with their regular prayer meetings in the market against the directive of the market leadership.

The emergency meeting held at the secretariat of the market at the Bridge Head, Onitsha, was attended by the chairman of the market, Anthony Chukwukelue Ezioba; his deputy, Norbert Okoli; and other exco members and stakeholders.

Speaking during the meeting, chairman of the market, Mr. Ezioba, said that the essence of reducing market prayers to once per month was to revive the market system, which, according to him, was almost collapsing as result of constant prayers and resultant closure of the markets.

"Recently, after a directive was issued by market leadership in Anambra, we summoned a meeting of all the 27 markets at the Bridge Head Market, which the drug market was one of them. The evangelical group of the Ogbogu Market was represented at that meeting, where we agreed that prayers would be held once every month, precisely, last Wednesday of every month.

Other stakeholders of the market, who spoke at the meeting, including Sir Donatus Ugwudike, former chairman of Ogbogu Market; Mr. Kingsley Anyiam Ohaerisoba, a stakeholder in the market; Okpara Law Uzobihe, former chairman and BoT member; Sir Norbert Okoli, current secretary of the market; and Mr. Ugochukwu Anozie, another stakeholder in the market; said the entire Ogbogu Market stands by the idea of having one prayer meeting per month. They described the insistence of the evangelical group in having regular prayer meetings as self serving and disobedience to constituted authority; and warned that they would not stand aloof to watch few disgruntled individuals distort existing harmony in the market. They also urged the chairman of the market union to disband the evangelical group if it would not adhere to the norms.

The President General of Bridge Head Market Traders Association, Onitsha, Mr. Sunday Obinze, also condemned the disobedience on the side of the prayer group and urged ASMATA leadership and state government to call the group to order.

A patron of ASMATA, Chief Rommy Ezeonwuka, who also spoke to this paper, said that upon announcement that prayers would be held once per month in markets, traders were happy. He, then,  wondered why a group would go against the directive, which, he said, was meant to reposition the markets.

"It is the truth and nothing but the truth that the prayer groups are there to enrich themselves through the traders. But there is no sense closing markets because of prayers. We do not have only one denomination in the markets. Just as Muslims go for prayers at their mosques whenever they want to pray; Catholics go for evening mass at their churches, individual traders can also go into their shops, observe prayers before opening for business. Evangelical group in Ogbogu is not a church; it is not an independent ministry; it has no structure of its own within the market. This place is a market, and must be handled so.

"ASMATA did not ban prayers in markets. What we did was to direct each market to choose a date when it will be having prayers once every month, so that traders and their customers would have the time to do their businesses unhindered. The idea of few individuals or groups trying to frustrate business of others because of selfish gains is an abomination that cannot be allowed to stand," Ezeonwuka warned.

Meanwhile, all efforts made to speak with Mr. Benjamin Akudo,  the chairman of the evangelical group in the drug market, Onitsha, was not successful as at the time of filing this report, as his lines were switched off all through.