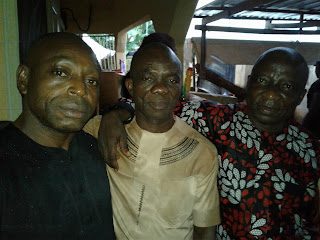 The newly elected chairman of Goat Dealers association in Agboedo Market Nnewi, Chuma Okoro. has restated there position in supporting the decision made by the South East governor's to reject the imposition of RUGA in the South East

He made this assertion last week, during the official handover to him as the new chairman of the association. He said " the policy of the federal government to impose on colonies in disguise is not only dead on arrival but a policy in bad light.

He said he has started a weekly sanitation clean up of their market place, which will ensure that the place is clean and decent at all times, because cleanliness is next to Godliness, which he said will attract more people to the goat market.

We went on to commend the past administration led by Comrade  Anselm, who handed over to him and promised not to fail members of his association and the general public, who patronize them.

He however called on the administration of Chief Willie Obiano to look into matters affecting them in the market which they have tabled to the government through the ministry of agriculture and expedite action on it for the interest of the general public.
Email Post