ISOPADEC: WE HAVE NO PLAN TO SACK WORKERS, SLASH SALARY -ISOPADEC MD 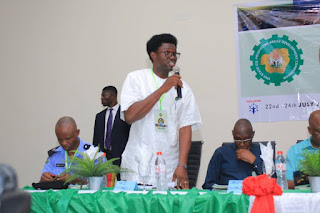 The Managing Director of the Imo State Oil Producing Areas Development Commission (ISOPADEC), Engr. Anthony Okwuosha, has assured that the Commission has no plan to sack workers or slash their salaries as against a report on Monday, August 12, 2019, suggesting that the Deputy Governor, His Excellency Rt. Hon. Gerald Irona, had recommended to ISOPADEC Board to consider sacking some of the workers or slash their salaries as a way of reducing the wage bill of the Commission.

The Managing Director gave the assurance through a press release by his S.A. Media and Communication, Mr. Collins Ughalaa, on Tuesday in Owerri, saying that the newspaper report was false.

Engr. Okwuosha said the report that he was about to implement the said recommendation and that workers at the Commission were apprehensive were also false.

He said: "There is no truth in the report as it is entirely fabricated and a vaticination of the parochial imagination of the purveyors and authors of the story", adding that the Managing Director and members of the Board of ISOPADEC have not received any recommendation or instructions from any quarters to either sack the workers or reduce their salaries for whatever reason".

The Managing Director assured that "The Board is not considering sacking workers or slashing their salaries at the moment and has not approved such action, as they are preoccupied  with moving the Commission forward and serving the people they are meant to serve better".

He noted: "Consequently, the Managing Director is not contemplating taking action to sack or slash workers' salaries as alleged in the false newspaper report.

"The Deputy Governor, His Excellency Rt. Hon. Gerald Irona has rather been challenging the members of the Board and the management team to rise up to the occasion and salvage the ugly situation in the oil producing communities. He has also been busy addressing the issues of poverty, unemployment, under development and security threats in the oil producing communities in the sister local governments of Ohaji-Egbema and Oguta in line with the state government's policy to develop the rural communities".

He observed that "there have been concerns of corruption, mismanagement and abuse of office, et cetera, in ISOPADEC. To address the situation, the Governor, His Excellency, Rt. Hon. Emeka Ihedioha, set up a panel to investigate the activities of ISOPADEC from 2011 to 2019. The panel is still sitting and has not produced or presented its report.

"As a responsible  government that is rooted in the rule of law and due process, the state government will not usurp the functions of the panel or preempt its findings through the Board of ISOOADEC or its Managing Director".

He called on the general public to ignore the newspaper report, saying: "The false newspaper report does not reflect the mood of the workers of ISOPADEC. The workers of the Commission share in the vision of the new Board and Management Team and have since been carrying out their duties without qualms.

"The general public is therefore urged to disregard the false story as it does not reflect the calm situation in ISOPADEC and the commitment of the Board, Management Team and the cooperation of the workers towards rebuilding ISOPADEC and tackling the challenges in the rural communities frontally.

"The general public is also urged to be ware of those who sow seed of discord in the polity by manipulating the media space and feeding the people with falsehood".
Email Post