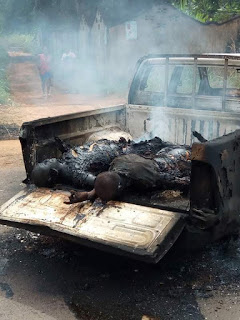 The division of interest in Oraifite took another dimension today as mob suspected to be cult members allegedly  took laws into there hands by setting ablaze two policemen with their van.

This clash was said to be as a result of the bottled up aggression over the police by members of the group who were not happy how the police treated the matter reported to them as was gathered by Nigerian Notch.

It was however gathered by our correspondent, that the matter was connected to the shooting of two people at the house of Mr. Ifeanyi Ejiofor, the Lawyer to the embattled IPOB leader, Nazi Nnamdi Kalu, by members of the police, in retaliation the youths of  community killed two police men and burnt them at the  Nkwo Market area of Oraifite.

Our correspondent also gathered that the police may have gone to Ejiofor's house with the thought that the people they were looking for are the ones who gathered at Mr. Ifeanyi Ejiofor's residence.

Continuing our correspondent gathered that the police on reaching the lawyer's house had an open confrontation with the IPOB members, which led to the squabble between the Police opening fire on the IPOB members which drew the wrath of angry youths of Oraifite, who mobilized and attacked the policemen and in the process, killed and burnt two police men.

Nigerian Notch however gathered that the incident does not have anything to do with either Mr Ejiofor or members of IPOB, but it was unfortunate the police went to Ejiofor's house and in an attempt to arrest of IPOB members.

While speaking with the traditional ruler of Oraifite Igwe Dr. Dan Udeorji, who confirmed the incident, but said he does not have the details as he was in Nnewi where the CMD of NAUTH was having a stakeholders meeting said the incident was sent to him through a text message.

Igwe Ugorji said that he was disappointed that such a senseless loss is still possible in present day Nigeria.

"It is very unfortunate that some people can be very quick with guns to kill, why did they not arrest the culprits instead of shooting them, there is no need for loss of lives at this time.

"I think every problem can be settled through dialogue instead of killing people, we must however maintain peace at all time, killing and rioting will not lead the country to anywhere, government need to re-educate the Police and the Army to forestall future occurrences. Killing citizens is not the way out"

In a police press release made available to Nigerian Notch, the PPRO of Anambra command, confirmed the incident. He attributed it to an attack by members of the force by the proscribed IPOB members


The press release read thus " On the 2/12/2019 at about 11:30 am,there was a formal  complaint against One Barrister Ifeanyi Ejiofor 'm' (a member of the proscribed IPOB) in Oraifite on alleged case of abduction, assault occasioning harm and malicious damage to property"

He said that following the report, Police Patrol teams led by the Area Commander, of Oraifite ACP Oliver Abbey mobilised and rushed to the scene in order to arrest the suspect who declined Police invitation.

He averred that as soon as Police arrived the house, armed men suspected to be IPOB members descended on the Police, set ablaze one Patrol vehicle and attacked them with rifles and machetes. As a result of the attack, two Police  officers whose identities are being withheld were killed by the suspected IPOB members while others were inflicted with machete cuts. The injured personnels were rushed to the Hospital for medical attention and are presently receiving treatment.

He said that consequently, the Command deployed reinforcements from the State Headquarters comprising of PMF, SARS and Special Anti Cult Units in conjunction with the Army/other Sister agencies who cordoned off the area in order to fish out the culprits,while Joint patrol are still ongoing in the town to prevent further breakdown of law and order.

The PPRO said that meanwhile,some arrests were made and the Commissioner of Police CP John B.Abang,fdc who is on his way to the scene has vowed to bring perpetrators of this dastardly act to justice, he concluded.
Email Post