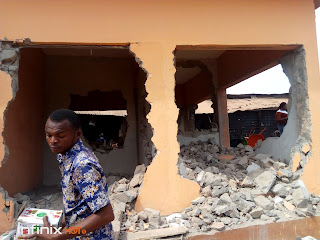 The rot in market management in the state has been exposed further, with the demolition of illegal lockup shops in Agbaedo Market, in Nnewi.

The Anambra State government, through the Ministry of Trade, Commerce and Wealth Creation, last week, demolished illegal lock-up shops built in Agbedo Market, Nnewi, by some market leaders and stakeholders, who were alleged to have connived with the interim management or caretaker committee in the market that was set up to look after the affairs of the market for 6 months.

The commissioner,  also ordered for the seizure of materials meant for erection of about ninety lock up shops in the market, and frowned at the actions of some individuals in Nnewi and parts of Anambra, who site projects within the state without approval from relevant authorities.

He however condemned the actions of Chukwudi Orizu (Chairman, Nnewi North LGA); Joe Enuma (Chairman, Agbedo Market) and Obinna Okechukwu (Chairman, New Auto Spare Parts Association, Nnewi), who were alleged to have conspired and encroached into the contract of Obumezie Company Nig. Ltd, by erecting shops under toilet facilities built by the company, in a manner not authorised by the state government.

On his part, the Acting General Manager, Anambra State Physical Planning Board, Mr. Anene Nwabufo assured that the agency would stop at nothing in ensuring that every structure in the state is guided by the law, and approval of the board. He said time has gone, when anyone will just wake up and start erecting a structure without the approval from his agency. He called on people to be mindful of unscrupulous elements whose interest is always to profiteer, without consideration of to safety standards.


Speaking to journalists after the exercise, the Chief executive officer of Obumezie Company Nig. Ltd, Nchedo Christopher Obor, commended the commissioner and his team for their timely intervention.
According to him, his company got a contract to build toilet facilities in Agbedo Market under the condition of build, operate and transfer (BOT) He said that based on the terms of the contract, his company built the toilet facilities without lock-up shops underneath, and wondered why such was thought of in the first place, as it was not in the structural design in his contract papers.

"Based on the terms of the contract, I built the toilet facilities as upstairs, but underneath was skeletal. I did the job based on specification, and on completion of the project, it was commissioned by the then commissioner for trader, commerce and wealth creation, Hon. Christian Madubuko.

"I was, therefore, surprised when I was informed that the caretaker chairman of Nnewi North Local Government Area, Hon. Chukwudi Orizu; directed Joe Enuma, the chairman of Agbedo Market, and Obinna Okechukwu, chairman of New Auto Spare Parts market, to build illegal structures under the toilet structures built by my company".

He harped on the need  to call the trio to order and mete necessary sanctions on them to serve as deterrent to those that would like to do the same thing in the future.

When contacted by our correspondent to clarify their levels of involvement in erecting unauthorised shops in the market, the trio of Chukwudi Orizu, Joe Enuma and Obinna Okechukwu, denied ever knowing about the allegations, as they swear to high heavens that they were not involved in the erecting of the illegal structures. All efforts made to have them speak on the situation at hand proved abortive as they neither responded or gave appointment to be meet on the issue.
Email Post