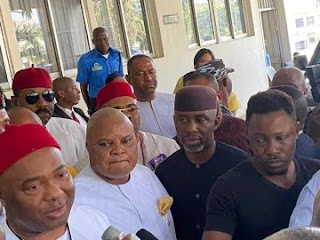 Governor Uzodinma gave the order shortly after he was sworn into office this evening as the new Governor of Imo State.

He also ordered that within the next four days, the Accountant General of the state should send him the comprehensive financial status of the state from May 29, 2010, till date. He ordered that payments for all ongoing contracts within the state, be suspended till further notice.

Recall, that the Supreme Court through a unanimous decision yesterday installed him him as Governor, while sacking Rt Hon Emeka Ihedioha, of the PDP who until now was at the helm of affairs of the state.

Since his emergence many schools of thought has believed that he has indeed come to redeem the image of the state, while pundits are of the view that its going to be business as usual.

Going by the divine mandate of his accession to the exalted office, many are of the view that he should be very careful of the mandate given to him, which is to bring smiles to the faces of Ndi Imo.
Email Post