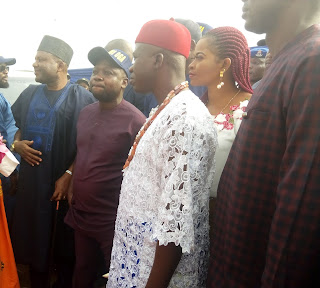 Prince Chijioke Mbanefo the highlife mastero, and the king of highlife in Nigeria, has floated a charity foundation, which is geared towards taking care of widows, orphans and the less privileged in the country.

The foundation, Prince Chijioke Mbanefo Charity Foundation, was officially opened on the 5th of January 2020, at his country home in Atani, where he invited friends and well wishers to join him in opening his multi million mansion.

In his welcome address at the official launch of the foundation, Prince Chijioke Mbanefo, said he is humbled because of what God has done for him over the years. He was thankful that God has seen him through the industry for over 20 years, which has produced 50 albums in the market.

He however stressed that anytime he looks around and see people suffering it pains his heart, knowing how it feels, for one to be in sure misery. He stated that he resolved to set up the foundation as a way of giving back to the society which has been very appreciative of his efforts and contributions to the society.

Continuing, he said that the essence of the foundation was to ensure that widows, orphans and the less privileged in the country  receive succour from him, from time to time.
He stated that it will be his own way of establishing his Corporate Social Responsibility to the society.

While opening the foundation, the chairman of the occasion High Chief Godwin Agbasimelo( Oga Ndi Oga) thanked God for the life of Prince Chijioke Mbanefo. He said " its rare to see any musician, or artist who has this type of interest for the less privileged in the country" He promised to give him all the necessary support to ensure he took the stride throughout the country.

In his first official function, Prince Chijioke Mbanefo doled out over 500 bags of rice, school paraphernalia, and also promised to pay tuition fees of the very indigent ones among them.