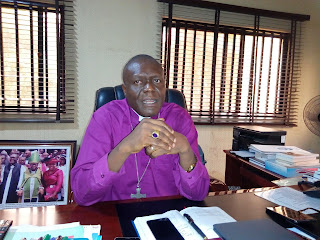 With the rising tension in Nigeria and the continued killings of Christians in the country, it behoves on one to look in wards, on how this security threats can be handled to push these criminals out of circulation.

Rt Rev Ndubisi Obi, the Anglican Bishop of Nnewi Diocese, in this interview with  Nigerian Notch, speaks on the challenges facing the country, and how it should be addressed, which borders on insecurity, call for the sack of Military service chiefs, issue of regional security, involvement of the clergy in politics and many more.

What is your view of the speculation that killings, kidnappings and violent attacks in Nigeria are targeted on Christians?

In Nigeria, we are experiencing both general and organised insecurity. In general insecurity, anybody could be a victim. We’ve seen Muslims and people of other religious backgrounds attacked and killed as a result of insecurity in Nigeria. We also experienced organised and orchestrated insecurity in Nigeria. This particular one is targeted at Christians. What we experience in Nigeria today is what I will call government backed, organised and orchestrated insecurity aimed at annihilating Christians in Nigeria. One major problem is that in the face of all these insecurity in the country, the body language of Mr. President does not show any readiness and wiliness to stop the threat. With that, one may be tempted to believe that the presidency is part of the problem. When you consider what the president is doing with the service chiefs, how he has been giving deaf ears to the general outcry for him to sack the service chiefs, you will only understand that there is an orchestrated plan to deal with innocent Nigerians. It is only in Nigeria that what is happening now in the country will be allowed to continue. Go to Niger, Cameroun, Chad and some of these African countries; once there is any attack on the military base of their country, they will quickly change their Chief of Army Staff. But look at Nigeria; recently, the House of Reps summoned the security chiefs, but they only sent their accountants, instead of personally honouring the invitation. After that, the Speaker of the House of Reps and the Senate President met with Mr. President over the issue of insecurity. At the end, what came out of the meeting? Look at the way Christians are being attacked, kidnapped and killed every here and then? With most of the things happening in the country today, one will only but believe that there is well organised and systematic plan to wipe out a particular religious group. When people who foresee what would happen tomorrow fought to stop the re-emergence of this government in 2019, many people did not understand. The other day, Pastor Adeboye and some of them were carrying placards in protest over insecurity in the country. What kind of useless protest is that? Were they not the people that were instrumental to the emergence of the present government in the first place?

Considering what is happening in Nigeria today, do you suggest that Christians should have organised security outfit as we have Islamic Police and Amotekun?

Initiators of the outfits you mentioned are smarter than we are politically. They have better political intelligence than those of us who are Christians in the Southern part of the country. The northerners understand what the issues are. But here, we don’t understand the issues at all. Here, we still practice kindergarten politics. My candid opinion is that a Christian security outfit cannot fly. Who or which denominational group will head the outfit? When it is headed by a Catholic, Anglicans will kick against it; if it is headed by a Pentecostal, Catholics will kick, and so on. What we should do in the south east is the kind of thing done in the south west where they formed Amotekun. The South West saw dangers ahead and formed the outfit to protect themselves. Regrettably, those of us in the east do not understand the issues. We have not seen the general picture – the picture of organised plan to wipe us out. Our saving grace as South Easterners is people at the North Central – those in Plateau and Benue. If the Boko Haram and Fulani Herdsmen can conveniently break the ranks of the North Central States and come into the South East, they will wipe us out, because, we are not prepared to defend ourselves. My take is that now we have vigilante groups in communities, rich men in the region should donate money to fund the vigilante groups properly, arm them to the teeth. If buying grenades will make them defend the south east better, let them do it.  This is because, if the insurgents overrun the North Central States, they will move down to the South East and South South, where we have better things they are looking for. When that happens, as long as we are not prepared to defend ourselves, our experience in their hands will be worse than what is happening in Plateau today. Of course, today, we know that Plateau is gone; they’ve taken over their lands, sacked their villages and took over everything. Once they come to the South East and we are not prepared to face them and give them a hot chase, we will not have any other option than to surrender to them and become their slaves.

How would you rate Buhari’s response towards insecurity in Nigeria?

Mr. President is not even responding to insecurity in the country. He is not proactive. His general disposition towards the security situation in Nigeria is very disturbing. Imagine a president that does not face the press; imagine a president that does not have time to address his country.  Look at Donald Trump, every Wednesday, he would appear on the television to address his people, and you will see him responding to salient issues affecting his country; but here we are in Nigeria. To me, a president should be informed, intelligent and decisive. He should be one that has global politics at the tip of his fingers. Look at how Trump handles issues of American economy and international relations! That is what a president should do; not the one you will ask A, and he will start answering B; you ask him C, he will start answering D. Everybody is even afraid of what he would say the next moment. That is not my own idea of what a president should be. To me, Buhari is carefree and nonchalant towards insecurity in the country. Recently, he said he was not even aware that Nigeria is facing high level insecurity.  Maybe, he will wake up one day to say that he is not aware that Osinbajo is the vice president.

What is your opinion on alleged marginalisation of Igbo people in appointments by Buhari administration?

Buhari said it at the onset of his government that nobody should expect him to share the national cake equal among those that voted for him and those that did not vote for him. So, any Igbo man expecting anything big from Buhari government is wasting his time. Look at the way he went about his appointments; he doesn’t care. All his security chiefs are Muslims.  All of them are of the Hausa/Fulani origin; he doesn’t even care! He does his own things the way he feels. This is the first time in the history of Nigeria when we are having a president who is surrounding himself with only people from his tribe. He doesn’t care about what you say about federal character or whatever. Marginalisation in Buhari’s government is so open that even the blind can see it and the deaf can hear it. Unfortunately, there is nothing you can say about his action that will make him change. For now, we can only bear with him for the next three years when his tenure will expire.

Would you align yourself with the position of the national assembly that current security chiefs should be removed?

Every sensible Nigerian will align himself with that option. They should be removed; that is the best thing to do now. Looking at the spate of insecurity in the country, the natural thing is to re-jig the security architecture and bring in fresh people. When new people enter, they would like to impress the country. You will see them going all out to change the tune of the music. By so doing, Nigerians will believe that M. President is doing the right thing; but this issue of adopting lackadaisical attitude towards the entire thing shows that the person at the head doesn’t understand what he is doing.

Fifty years after the civil war, do you think the federal government has been able to resolve the issues that led to the war?

I will advise you read the Ahiara Declaration, 1969. There, you will see the issues in contention. All those issues are still there. Infact, they are worse today than they were those days. Ojukwu was a prophet; he saw what would happen if this entity called Nigeria would be allowed to be. For this country to succeed, Nigerians must sit together, look at the entity called Nigeria with every sense of patriotism and think out how to move it forward. The best is to allow every component part to be on its own and fashion out ways of developing on its own pace. Nigeria should be restructured in a way that the component parts will be allowed some autonomy like what we had when we had Eastern, Western Northern and Mid-Western Regions. That is the way Nigeria will work. Let every part run its own affairs; then, have a figure head at the center, which will coordinate the affairs general affairs. Anything short of that will continue to fail.

How do you access Fr Mbaka and his style of political prophecies?

As far as I am concerned, the young man is doing what he things are in line with his calling. Everybody has his own calling. As far as I am concerned, he is fulfilling what he thinks is God’s calling for him. For a young man like that to command the kind of influence Mbaka is commanding, so that governors and influential people are trooping to him is a very positive thing, I think. From a distance, I admire that young man called Mbaka. To enjoy the kind of followership in that adoration ground is not easy. Anybody that says it is easy should start his own ministry. Mbaka is fulfilling his ministry, and I wish him well.
Email Post