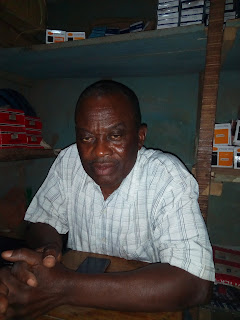 Chief Edward Mmuozuom, the Chairman Nnewi Traders Association, which is the umbrella body, recognised by Anambra state government to overlook activities of all the markets in Nnewi, the industrial hub of the South East, has hailed the doggedness of Hon. Obinna Okechukwu for his efforts at repositioning the market, which he said is visible in all ramifications.

He made this assertion in his office, during an interactive session with newsmen, on the progress made so far by the government and Governor of Anambra state, led by Chief Willie Obiano towards bringing lasting peace in the markets in the state.

He said that, Hon. Obinna Okechukwu has shown, he has the capacity to bring lasting peace in the market, through the many visible and viable projects he has initiated and also completed. In his words "  the young man should be commended for making frantic efforts to see that real development came into the market through building of box culverts, provision of standard generating sets in the market, construction of some roads in the market and so much more"

He however said that its funny that some folks in the market, who are yet to define there roles in the market is fighting the first living Chairman in the market who has shown capacity. He therefore cautioned those fighting him or writing petitions against him to remember that Hon. Obinna Okechukwu does not own the market, rather he works for the state government who has exclusive right over all activities in the market. He tasked traders to always ensure that they pay there stillage fees according to the number of shops they have, because Anambra state government is coming for there revenue, which is to help drive development in the state.

He advised stakeholders in NASPA to always ensure they stand on the part of truth, because the reason they are stakeholders is to ensure that the progress of the market is paramount.

Chief Mmuozuom also advised, that anyone that has questions to ask should ask those that have been bestowed with the authority by the state government to look after these market which he is the Chairman in Nnewi, to avoid unnecessary and unwarranted issues, that would have ordinarily been resolved, going into something else that in the end, constitute a waste of time and resources to parties involved. He therefore, also commended Governor Willie Obiano for giving NASPA someone like Hon. Obinna Okechukwu, who has indeed brought visible smiles to traders in that market.
Email Post