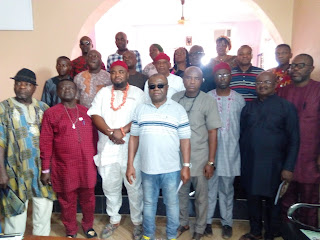 An Igbo socio cultural group, known as Emume Owuwa Anyanwu, has inaugurated its Anambra chapter of the organization. Emume Owuwa Anyanwu organisation was however founded to promote the course of the Igbo people, worldwide, with the mandate to revive, revamp and promote such ideals that are almost going into extinction.

The inauguration, which held in Awka on Saturday, February 8, drew dignitaries from all walks of life, including members of the organisation from Imo, Abia, Enugu and Ebonyi States.

While inaugurating the officers at the headquarters of the organisation at Ngozika Estate, Awka,Chief Frankel Nwachinemelu Ogwujimba, the National Leader of the group, tasked officers to go into their wards, local government areas and zones to propagate  the ideals for which the group was set up, which was to bring back the culture, tradition and folklore of the Igbo man.

He also said the group would help in promoting tourism in the 5 south eastern states, in order to promote happiness and longevity, earn foreign exchange and propagate the image of the Igbo nation to the wider world.

"Our aim is to bring out the genuine and original identity of the Igbo man. We want to reinvent the industrious Igbo man; the Igbo man that can reason independently and fend for himself.

"We want to bring out some of the forgotten ideals of the people, and also reintroduce some of the local games, traditions and cultures that were long forgotten and abandoned."

He said the group would be apolitical, as it would not be engaging in any political activities.

Speaking after the inauguration, the Anambra State coordinator of the group, Rev. Cannon Chris Orajekwu, commended the promoter for his noble initiative and promised that in the next few weeks, the group would be fully on ground in all the nooks and crannies of the state with messages that would promote the ideals of ndigbo.

He urged his officers at the zonal, local government and ward levels not to be found wanting in the discharge of their functions in their various areas of jurisdiction.
Email Post