WILL SHOCK IMO WITH GREAT ACHIEVEMENT IN ONE YEAR – GOV UZODINMA 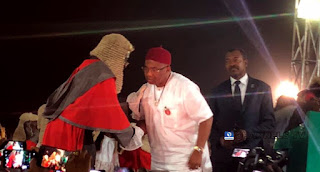 Imo State Governor Hope Uzodimma says that he will shock the people of Imo with breathtaking achievements in the next 12 months of his administration.

He assured that the achievement will change the landscape of the state and make the people thank God that they elected him governor.

Uzodinma, however, appealed to the people not to judge him by the records of past leaders of the state but rather with what he is able to do with his mandate as governor.

He assured the people that his administration has a well-laid out manifesto that will accelerate the development of the state and bring prosperity to all its people.

“Within the next 12 months, you will see a great difference. My government will shock you with breathtaking achievements that will change Imo State for good,” the governor boasted.

“You will be happy that you elected me your governor and you will know that my mandate is destined by God.”

He enjoined the people of the state to give his government all the necessary support, noting that he cannot succeed without the support of the church and the people. He added that Imo people should see his mandate as one ordained by God and be rest assured that he will not fail them

Making reference to the Bible reading of the day to buttress his point, Uzodimma said that what happened in Imo was like what happened with Prophet Samuel. According to him “those who came out first did not receive the anointing for Imo governorship until he came just like Samuel rejected Jesse’s other sons and waited until David came from the field to anoint him King of Israel.”

The governor also used the opportunity to reassure the people that his government was ready for the battle to contain the dreaded novel coronavirus pandemic.

“As a government, we have put everything in place to make sure that Imo State is free from coronavirus, so you don’t have anything to fear,” he assured the gathering.

Meanwhile, the Archbishop of Owerri Catholic Archdiocese, Anthony Obinna, said he was happy with Governor Uzodimma’s assurance that there will be great achievements in coming 12 months.

“It looks like the governor knows that I will be retiring in 12 months time, so these expected achievements will be a befitting retirement gift for me,” the archbishop said.

Other dignitaries who graced the church service were the deputy governor of Imo State, Prof Placid Njoku, the Speaker of the House of Assembly, Collins Chiji, Hon. Paschal Okolie (Ebekuodike Na Orlu) and other top government officials.
Email Post