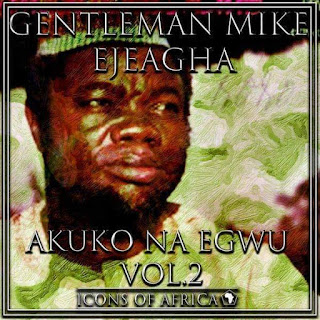 Whenever an elderly Igbo person says to you AKUKO MIKE EJEAGHA, the truth is that your story is unbelievable to the person like folk story. The idiomatic expression, AKUKO MIKE EJEAGHA is coined from the evergreen music of a man called Mike Ejeagha whose first music is titled Akuko na Egwu ( Story and music).
Mike Ejeagha (born August, 1932) is a Nigerian folklorist, songwriter, and musician.

From Enugu State, Nigeria, Mike Ejeagha started his career in music in the mid-20th century. Also known as Gentlemen, Mike have been influential in the evolution of music in the Igbo language for over 6 decades. His first hit was in 1960 - the year of Nigeria's independence.


Mike Ejeagha has a distinct story-teller accompanied by guitar style and his lyrics are laced with proverbs; lending his music a didactic style. Iconic Mike Ejeagha taught Igbos contentment, selflessness, true spirit of brotherhood as epitomized in love, being our brothers keepers, etcetera. Some of his popular melodious tracks are: omeka agu, uwa emgbede, obi aku, & nnam eze. At a point, his philosophical songs and ancient folklores assumed the conscience of Igbo nation.

He is one of the few legendary Igbo highlife musicians who did not sing-praise of  any wealthy man. He did not fall to the temptation of sycophantic hypocrisy to massage egos of rich people by praising them. Ejeagha did not allow obsessive quest for materialism corrupt the philosophical purity of his folkish songs. He fell sick in November 2018 and was stranded at a hospital at Enugu.


Igbos rushed and gave him financial uplifting. The governor of Enugu state later visited him at his home to offer financial assistance and employment to his daughter. The Enugu promised on 10th November 2018 to take care of him all the remaining days of his life. A street is named after him at Akpakpa Nike, Enugu. He is still alive.
Email Post