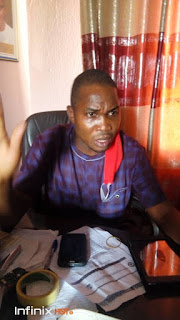 The Executive Chairman of Old Motor spare parts (Ngbuka Obosi), Ogbuefi, Ezeobodo, Simon Okechukwu, has once again, reiterated the fact that they don't harbour criminals in the market, which for some time now, has been the mis- conceived notion of some members of the public.

He made this assertion recently in his office while interacting with newsmen on the progress made so far, in bringing back peace and calm to the market, since his election as the executive chairman of the market.

He asserted that before his taking the saddle of leadership in the market, that most people for the fear of thugs and hoodlums in the market preferred not to come to the market to avoid stories that touch the heart as he stated.

He said that since his emergency as the executive chairman that he has helped bring calm to the market by ensuring that pick pockets and car jacker's who constituted nuisance in the market was shown the way out, and has jailed over 27 of them, and sanctioned several of them who have signed undertaking never to come to the market again because of the petite theft.

The chairman however regretted that the recent report by the police about car jacking in the market did not in any way have anything to do with there members, as they have rules and regulations of how they are to buy cars in the market.

He stressed that the issue the police referenced was done at a place called Massob in the market, which they do not control, neither do they have access to the facility, because any car that is sold in the market is documented for reference purpose.

He thanked the Governor of Anambra state Chief Willie Obiano for his proactive efforts in combating crime in the state, which he said, he is towing the same line, with the Governor and asked that the police in the state should work hand in glove to root out criminals in the market, rather than engage in extortion, which has been the case in the recent past.

He therefore thanked the traders in the market for the support and encouragement they have been giving him and promised not to let them down.

He also thanked his executive who has also supported him, which has helped him take proactive action for the welfare of the market.

He called on the members of the public to note, that Old motor spare parts Obosi is calm and good for business dealings.