YPP: A New Political Party that Will Change the Status quo in Anambra State. Let us Embrace Her. 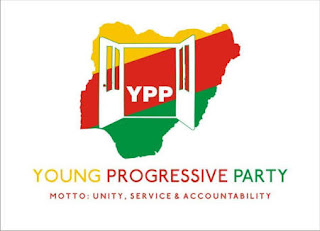 By Obiagha Victor
The journey to Agu Awka 2021 has long started, all the major political parties in the state are presently warming up to take over the number one leadership position in the State from the outgoing incumbent, come 2021.
This calls for deep evaluation of the parties  and her candidates, and what they are offering the people as a bond.
The Young Progressive Party (YPP) is a party to watch out for in  the forth coming elections in Anambra State. The party today in Anambra, presents hope, to the common man in the  actualisation of societal dreams, equity, progress and overall development of the state
YPP, is a party that  sponsors visionary and highly cerebral young leaders at all strata of the society, in order to end the age long bad governance, in the Nigerian political system.
It is a party whose sole aim is to build and sustain a state (especially a commercial one like Anambra), with a vibrant economy, designed to serve the people's interests, in which good governance, market forces and transparent institutions combine to enthrone a free and democratic society, that will guarantee equity, justice, and equal opportunity for all citizens.
Ndi Anambra, from the south extraction led the revolution by gathering at the polls to meticulously vote the second to the last party (YPP) on the ballot paper (with the open door symbol ) during the last elections.
It shocked many how both the young and the elderly having reached a consensus on who they want for the Senatorial seat were able to differentiate the party logos and voted their son into office. As an election observer then , I was amazed at how the elderly, especially the women, were insisting that they want to vote 'onu uzo mepere emepe " (the open door ) for Senate and once they identified the Senate voting paper, they went directly to the second, to the last Party on the list, identify the slightly open symbol and fixed their thumbprints there .The result was a resounding victory for the YPP in Anambra South .
Today the die is cast once again .Ndi Anambra South have sent a strong signal to the entire state, and the signal is that our Ojukwu of blessed memory being an illustrious son of Nnewi, whom we the Igbos have close affinity with, because of this exploits as a true democrat and a progressive, from the South, has spiritually endorsed a new Party for Ndi Anambra since the center could obviously no longer hold in APGA today.
The open door revolution (signalling the steady gathering of men of timber and Calibre on one side and youths desirous to take their destinies into their hands on the other hand),is ongoing as Ndi Anambra, gets set to bring another party, into limelight to serve as a vehicle for the development of the commercial and industrial state.
While other parties that have been tested already in Anambra, continue to bicker over the various ongoing shenanigans in their respective parties, Ndi Anambra wait quietly to extend the statement made by Ndi south to the entire state, in the last elections, where Senator Dr Patrick Ifeanyi Ubah against all odds won a landslide in an election that was too close to call.
The Young progressives are today the most sought after bride, and the greatest asset they have going for them, is the open door ideology, whereby our people have direct access to their leaders, which has made their inputs to matter, unlike other political parties that will disappear after elections,  only to re appear again when it is time to seek for the people's mandate.
The rate at which the party is gathering momentum in various localities from Anambra North, to Central and in the South, serves as the greatest testimony to the fact that our people are highly sophisticated , politically exposed and know what they want at every point in time
Obodo ekwelu go, na YPP bu the real Nke Anyi
#DivineMandate
#OpenDoorRevolution is here
#OneMoreShot
©2020
Email Post