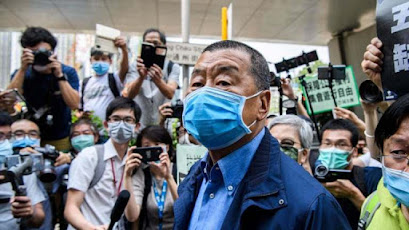 Hong Kong media mogul Jimmy Lai was arrested Monday on suspicion of breaching the new national security law, local media reported. Lai was arrested on suspicion of breaching the new law, according to local broadcaster RTHK and SCMP. Hong Kong police confirmed on Twitter that seven people aged 39 to 72 were arrested on suspicion of breaches of the national security law, but did not confirm their names.
The suspected offences include collusion with a foreign country, police said, adding that an investigation was underway. Lai is the owner of pan-democratic tabloid Apple Daily and a prominent pro-democracy figure. Apple Daily posted footage on social media of dozens of police officers entering the Next Media Building, the newspaper’s headquarters, with images showing police searching floors of newsdesks.Steve Li, the chief superintendent of the national security law, was seen in live footage filmed by Apple Daily staff at the scene. The national security law imposed on Hong Kong by Beijing came into force on June 30, the eve of the 23rd anniversary of the handover of the ex-British colony back to China. It targets secession, acts of terrorism, subversion and collusion with foreign forces.
The law has garnered widespread international criticism which has resulted in countries including Britain, the United States and Germany making moves to withdraw their extradition treaties with the territory. The US has placed sanctions on Hong Kong’s Chief Executive Carrie Lam and ten other officials for “implementing Beijing’s policies of suppression of freedom and democratic processes.” The foreign ministers of the US, Britain, Canada, Australia and New Zealand on Sunday called Lam’s postponement of the 2020 Legislative Council Elections a “disproportionate postponement” of the polls, though Lam cited a surge in coronavirus cases in the city as the reason for the decision. Lam announced the postponement of the elections for one year on July 31, a day after 12 pro-democracy election candidates, including high-profile activist Joshua Wong were disqualified from the race.
Credits: DPA
Email Post