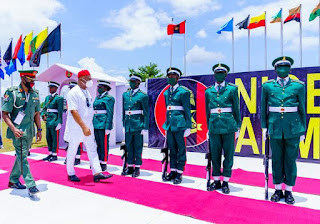 The Chief of Army State, Lt. General Tukur Yusuf Buratai made the assertion on Monday when the leadership of the Nigerian Army paid a courtesy call on Governor Uzodimma ahead of the opening ceremony of Regimental Sergeant Major Convention 2020 holding in Owerri, the Imo State Capital.

Represented by the Army Chief of Policy and Plan, Lt. Gen. L. O. Adeosun, the Army leadership said they were in Government House, Owerri as “mark of respect” for Governor Uzodimma, and in appreciation of all the support he has shown to the Army in Imo State, since he became Governor.

The Army leadership also  commended the good people of Imo State under Governor Uzodimma’s watch, describing Imo as “a friendly State to the Nigerian Army.”

Lt. Gen. Adeosun, however stressed that the event which brought the Army to Imo is not the first and that they are optimistic it will not be the last because of the cordial relationship that exists between the Nigerian Army and Imo State government.

The theme of the RSM Convention 2020 is “Regimentation as an instrument of Professionalism, The Role of the RSM.”

The host Major-Gen. Lasisi Adegboye who is General Officer Commanding 82 Division Nigeria Army, Enugu and Major-Gen. U.  S. Yakubu, Chief of Administration, Army in their welcome address urged the RSM to pass their experiences to the younger ones.

Both Army Chiefs acknowledged that RSM are custodians of discipline and professionalism in the Army with Major. Gen. Adegboye insisting that “Knowledge not shared is wasted Knowledge.”

They said the convention has lined up resource persons that the participants can draw from their wealth of experience to build professional competence, education and discipline.

While declaring the event open, the Chief of Army Staff whose address was read by Lt. Gen. Adeosun said the convention is one of the training avenues to achieve his mission for the Nigerian Army.

“it is necessary you are adequately trained to play the role of bridge builder between the Army Officers and Soldiers, Buratai said, adding that the need to strengthen regimentation and discipline in the institution and at the barracks cannot be overemphasized.

Governor Uzodimma in his remarks assured the Army that he will continue to partner with them for security of lives and property in Imo and beyond.

He applauded the Army for the successes the institution has recorded in the country, thus far in collaboration with sister agencies, and urged the leadership of the Nigerian Army to intensify efforts to ensure that normal life returns to the North East where the people still feel insecure.

Governor Uzodimma thanked the Army leadership for choosing Imo for the event, stressing that the good people of the State will always be happy with their activities.

The governor specifically thanked the Chief of Army Staff for the choice of Imo for the convention.

Governor Uzodimma further reiterated that the Army is a disciplined institution, and charged the participants to take advantage of the training to improve the lot of the Army in their different areas of activity and calling.