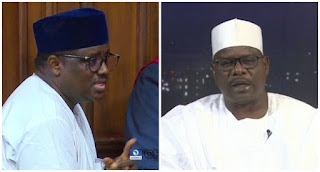 Justice Okon Abang gave the order when Ndume, who represents Borno South Senatorial District, failed to file a formal application to show cause why he should not forfeit the bail bond of N500 million deposed to,  on May 5th to stand as surety for Maina.

The EFCC’s Lawyer, Mohammed Abubakar, had, on Nov. 18, asked the court to make an order for the lawmaker to forfeit the bail bond since Maina, who he stood as surety for, had jumped bail.

Abubakar also asked the court to revoke Maina’s bail and issue a warrant of arrest on him.

Although the court granted the applications by the EFCC on Maina, it gave Ndume an opportunity to appear with his legal representation and adjourned until Nov. 23.