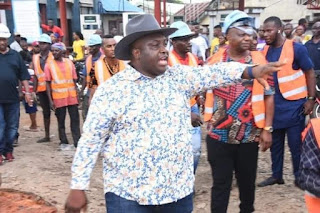 The Federal Ministry of Works and Housing has retracted their earlier letter dated November 4, 2020 which the government of Chief  Willie Obiano has held firm and was circulating on social media claiming that Senator Ifeanyi Ubah did not obtain approval before embarking on maintenance of federal roads in Nnewi and its environs.

In an official letter, made available to Nigerian Notch today, November 13, 2020 and signed by the Federal Controller of Works, federal ministry of works and housing, however explained why it issued the first letter, which it stated, that it was as a result of communication gap between the ministry and  contractor handling  repair works in the said roads.

Governor Obiano some weeks ago had attempted to stop  Senator Dr Patrick Ifeanyi Ubah from rehabilitating  federal roads in Nnewi and its environs, with claims, that approvals were not sought.

The government in the state regrettable went so low to state that approvals from the state or LG authorities to repair federal roads were not sought for by the YPP Senator, and went on to arm twist the federal agency at Awka into claiming that they were not informed of the road maintenance.

To state the obivious today, the Federal Ministry of Works and Housing has retracted its earlier letter which Obiano camp had celebrated. The Ministry has therefore by this recent letter asked Senator Dr Patrick Ifeanyi Ubah to continue with the rehabilitation of roads in Anambra south senatorial zone unhindered, as has been envisioned by the amiable senator, whose interest is the people.