SEN. DR. PATRICK UBAH AND THE ANAMBRA PROGRESSIVES: WHAT A FORMIDABLE SYNERGY! 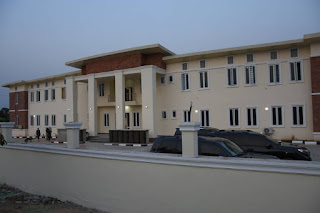 On the 28th of December 2020, members of the Anambra Progressives And Development Union in their numbers stepped out for the second time, with  royal dance steps as witnessed some months earlier in Nnewi: This time bigger and better as those in the diaspora that couldn't make the first commissioning as a result of flight restrictions came in in full force.

As mentioned earlier, this won't be the first time they are stepping out in such grandeur as they did same in September at the permanent site of Nnamdi Azikiwe University teaching hospital in Nnewi/Oraifite, where they also built and  donated a medical complex, which currently is the only functional building in the entire  permanent site.

Today that completed state of the art facilty is dispensing medical succour and interventions to thousands of our people in Anambra South Senatorial District and Ndi Anambra in general as well as visitors that troop there from far and near in search of medical solutions.

The gigantic and well-equiped structure recently completed in Awka  has taken its place in history, as not just the best medical facility you will have in a university, but one that would also rival most of the structures you see in Federal teaching hospitals across the country .A medical and isolation centre built with the full ambience of a five star hotel setting and then fitted with the some of the best medical equipments on offer in this part of the globe.

The Anambra Progressives and Development Union  has been exemplary in her actions and has remained consistent in her sustained efforts aimed at developing the key sectors of the economy of the state since the State Government seems to have failed in that regard.

How best else to kick start this developmental mission than from the health sector as health, they say, is wealth and it takes a strong and healthy populace to trigger and institutionalize economic advancements and exploits.

It's also on record that, for the first time after the civil  war, the Igbos are coming together and rising above rhetorics and mere lip services to join the clarion call of rebuilding their society and this was made possible by Sen Dr. Patrick Ifeanyi Ubah, a great achiever, an idea bearer, the prince of the 9th Senate whom at the peak of the COVID  lockdown rallied these great sons and daughters of Igbo land  together and collectively tasked themselves to donate resources to help fight the epidemic by providing well equipped  hospitals to Ndi Anambra and today we have two hospitals in the two senatorial zones of South and Central with another coming up for the Anambra North Zone in Onitsha after the previous effort being made in Nsugbe got torpedoed by the State Government.

Going down memory lane, the  Anambra progressives by its actions  have rekindled the almost lost Igbo spirit that saw Igbo's come together to build the Sam Mbakwe Airport,  the almost lost Igbo spirit that helped Igbo's sustain the civil war for several years  through their ingenuity and outside the  box exploits even in the face of massive economic embargo and  blockade then.

As I appreciate the great sons and daughters of Anambra, both home and in the diaspora, that came  together  under  the umbrella of the Anambra Progressives, I also extol Sen. Dr Patrick Ifeanyi Ubah for conceiving this idea and being at the forefront by providing leadership  just like Ojukwu did during the pre civil war crisis.

The beautiful thing about being Onye Igbo is the undisputed fact that we are the richest tribe in Nigeria, but yet we have remained underdeveloped over the years  as a result of a combination of obvious absence of the Federal Government presence in the region as well as the below par performances of various past  leaders from the zone who have, over the years, paid more attention to their personal interest and aggrandizement as opposed to issues that concern the well being of the region.

Sen Dr Patrick Ifeanyi Ubah has, by this pact with Anambra Progressives, reenacted the spirit of oneness,  industry and handiwork, for which the Igbo's are known before the Nigeria-Biafra imbroglio that culminated into over 3 years of civil war. Senator Ubah has, by his actions, made a loud statement that Igbo's with the right prodding and under the right leadership  can still develop our region collectively even without Government help. It is common knowledge that  all built up areas in Nigeria today were  practically done by the Igbos with their investments and aesthetic structures littered all over the country and globe.

We today know, through Senator Ubah, that it is possible to galvanize Ndi Igbo into replicating what the Igbos have done elsewhere across the globe  in Igboland even after the ill fated civil war that left the Igbos high and dry.

Anambra progressives and Development Union  have taken the bull by the horn at a time when the government is still dillydallying with the establishment of the South East Development Commission (SEDC) and tasked themselves with the onerous task of rebuilding Anambra State. If only we have one Sen. Dr Patrick Ifeanyi Ubah in each of the remaining 4 states in the East, I am convinced that we do not need a SEDC to chart the economy of the region.

Indeed, history will be kind to Senator Dr Patrick Ifeanyi Ubah for the various interventions he has brought, both through Anambra Progressives and in his individual capacity, as this is the first time in the annals of history that Igbo's will in there numbers come together and agree on how to drive development in a state in Igboland.

As the progressives round up the unprecedented interventions in the health sector and embark on the second phase of the development which is the building of an industrial city and bonded terminal billed to provide jobs for over 25 thousand of our teeming youths populace as well as boost the commercial prowess of our dear state, Ndi Anambra are left with no other option than to continually pray that every negative  force that plots to serve as stumbling block on the paths of these great sons and daughters of the state be cut off and cast into the deep shores of the River Niger!

May God bless the  Anambra Progressives, the undisputed heroes of 2020

May God bless  Ebubechukwuuzo na Nnewi for being an idea bearer and convening the progressives.

2021 shall be a crowning year in the efforts at redefining governance in Anambra State and ensuring that the commercial state of Anambra takes back its place as the leading state and economic driver of the South East region.