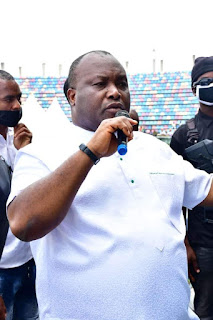 In line with his open door policy style of representation, whereby his constituents enjoy direct access and periodic updates of his activities in the red chambers, the Distinguished Senator on Saturday night held a live chat/interactive session  on Authority FM with the people of Anambra South, who also turned up enmasse for the interactive broadcast session on radio that was to later last till 2am in the early hours of the morning. The Distinguished Senator used the opportunity to

thank Ndị Anambra South, for their overwhelming support in 2020, while urging them to keep it up as he highlights his capital projects so far and updated  them on the present efforts being championed by him to promote their wellbeing and protect their interests at the Center stating that the successes recorded by his office in the past year wouldn’t have been possible without the continuous love and support that were showered on him by his constituents as well as the periodic  feedback he gets from them. He also thanked the traditional and religious leaders of various communities in the Senatorial District for their unending support and reassured them that he will never disappoint the people.

The YPP National Leader further used the opportunity to highlight on the capital projects that his office has embarked on so far, he also revealed his plans, to make the District a better place in the nearest future. Responding to a caller who expressed concern over the seeming concentration of road works in  Nnewi , he explained that being the commercial nerve center of the Senatorial District, Nnewi community needs a good road network especially during the yuletide, in order to ease traffic and movement of goods and services across other local government areas in the District. He further informed the people that efforts are in top gear to construct roads across the seven local government areas of Anambra South with some already flagged off .

Speaking further on his efforts in the past year to better the welfare of his constituents, the Senator revealed that he is currently building hospitals in Uga and Ekwulobia both in Aguata Local Government Areas and that those hospitals which are near completion will soon be commissioned. He further stated that plans are on the way, to construct at least a classroom block as well as provide  every school in every local government area of the Senatorial District with computers and laboratory equipments. He further informed them about his efforts at the red chambers that will culminate into a Federal medical centre in Uli , a DSS training school in Uga , a petroleum tankers  safety institute to be sited in Oraifite , an Aviation school in Mbosi etc.  He also informed his listeners that he is currently building two homes for the elderly in each of the local government that make up the senatorial zone .As well as other projects that will be unveiled strategically as time goes on.

The Anambra South Senator went further to appreciate the youths for their support, and announced that a scholarship programme  that will benefit three hundred persons will soon come on board. He  urged the constituents to always stay tuned to Authority 91.9 FM as further information about the scholarship programne shall be communicated through the medium. On his efforts to promote security of lives and properties, the Senator said that  he will continue to take  necessary steps to support the  security agencies in carrying out their constitutional duties diligently just as he did during the EndSars protests by stepping out even in the face of great personal risk to dounse tensions and stop the destruction of lives and properties. He further disclosed that he has already provided solar powered street lights at Uli and Ihiala in Ihiala Local Government Area and Umunze in Orumba South Local Government Area that spanned several kilometres in order  to secure businesses and nightlife and to also improve the security of those communities.

The Anambra South Senator also used the opportunity to thank the members of Anambra Progressives And  Development Union for their selfless contributions in promoting the wellbeing of Anambrarians. Anambra Progressives is a group of prominent citizens convened by the Senator to contribute towards the development of critical sectors of the Anambra State Economy. The group in less than ten months, single handedly built two ultramodern medical and isolation centers at Nnamdi Azikiwe University Teaching Hospital (Permanent Site),  Nnewi-Oraifite and Nnamdi Azikiwe University, Awka. Both facilities have been commissioned and handed over to the managements of the two institutions. The group is also currently championing the construction of an Industrial City and an Inland Container Terminal in the state. The projects when completed will provide thousands of jobs, promote businesses and also boost the state’s economy.

Concluding, Senator Ubah thanked his listeners and urged ndị Anambra South to always give him every necessary support and feedback. He also wished everyone a successful new year and reassured the people of his commitment towards attracting policies and projects that will better their wellbeing.