The Principal And His Proteges 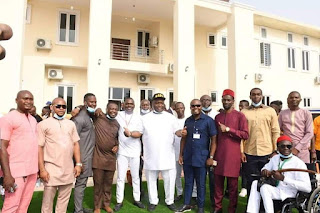 Tell me any Anambra Politician Who Has Empowered His Followers From Boys To Men, I Will Show You An Ifeanyi Ubah

Tell me any Governorship Aspirant who has so much stake in the State by the volume of his personal Investments he has cut across the State, and I will show you an Ifeanyi Ubah.

Tell me any Anambra Elite who is down to earth and surrounds himself with mainly the Youths and the poor instead of old men and the rich and I will show you an Ifeanyi Ubah.

All Sen Ubah's Personal Investments have over 85 percent of its staff as Youths.

For his love for Anambra Youths, Sen Ifeanyi Ubah was the only Anambra born Politician who came out during the #EndSARS Protest at the risk of his life to calm protesting Youths down across the State.

Such a man If elected Governor would go extra mile to attract Investments into the State and invoke policies that would create more opportunities for our youths and women in Anambra State to be gainfully engaged.

Even some of his critics today on social media have had the same opportunities given them by the same man   and have tapped from his benevolence...With many visiting abroad today courtesy of the same man.

Which other politician in Anambra can boast of exposing and empowering his proteges the way an Ifeanyi Ubah does ? Gosi anyi ka anyi fu na anya.