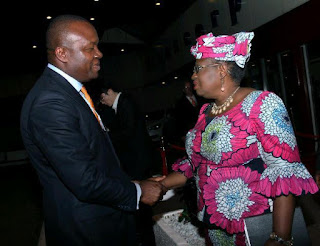 Valentine Ozigbo, the immediate past president and group CEO of Transcorp Plc, has congratulated the renowned Nigerian economist, Ngozi Okonjo-Iweala, on her appointment as director-general of the World Trade Organization (WTO).

Dr Okonjo-Iweala has served as Nigeria's finance minister and foreign affairs minister from 2003 till 2006. Most recently, she was the country's finance minister and co-ordinating minister of the economy which she served from 2011 till 2015. Her rich resume includes a 25-year stint at the World Bank, where she rose to the number two position of managing director. She was appointed as the director-general of the WTO on Monday, February 15, 2021, after representatives of its 164 member countries held a vote.

In a statement issued on Tuesday, February 16, 2021, Mr Ozigbo lauded Dr Okonjo-Iweala as "an icon of excellence, a trailblazer, and a world-shaper."

"The world is going through a peculiar time in which the capacities of economies are being tested. Her appointment is an expression of faith by world leaders in her abilities to steer the affairs of an important institution such as the WTO at this trying time.

"Dr Okonjo-Iweala'sOkonjo-Iweala's appointment is timely, significant, and inspiring. This is also well-deserved and is in line with her track record for being a trailblazer and a world-shaper.

"She is a shining example to all Nigerians, Africans, and especially women. She is an icon of excellence, and I am convinced that she will continue to excel," the respected business leader added.

Dr Okonjo-Iweala's emergence as the WTO's director-general makes her the first woman and first black person to hold the powerful global trade position. Her term begins on Monday, March 1, 2021.

Okonjo-Iweala is an economics graduate of Harvard University and holds a PhD in regional economics and development from the Massachusetts Institute of Technology (MIT). She is an international development expert and sits on the boards of Standard Chartered Bank, Twitter, Global Alliance for Vaccines and Immunization (GAVI), and the African Risk Capacity (ARC).