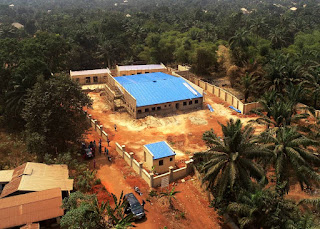 The people of OAU (Old Aguata Union) rejoice as the distinguished Senator representing Anambra South Senatorial District embarks on ground breaking projects in the zone. The Senator, who

was accompanied on the inspection visit to the Constituency project  by an elated Bishop of Ekwulobia Catholic Diocese along with several other priests, expressed joy at the rate of work done at the site. Senator Ubah however reiterated that under his watch, projects must be carried out within specific time frames and standards without any compromise. 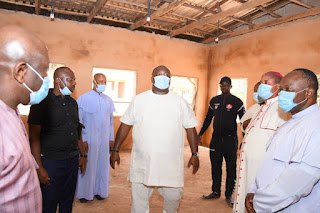 He said "I want to revitalise and  revolutionalize all the comatose areas of human welfare and development in Anambra State and I made the decision to start from the health sector, as it takes a healthy man to work and enjoy infrastructure like well tarred roads, bridges, etc"

The Senator who remains indebted to his allies in the Anambra Progressives And Development Union for harkening to his call and delivering two gigantic healthcare edifices within just a few months, said that by the time all the hospital projects ( both constituency and those from the progressives he convened) are delivered, he will have succeeded in bringing to fruition his vision of changing the narrative in the decayed health infrastructure in the State and providing medical succour for our people

Another healthcare centre is also currently on-going at Uga,  also in Aguata LGA!

The Distinguished Senator by providing four health care institutions in less than two years of his sojourn in the red chambers is on a mission to trigger a status quo change in politics propelled via his open door policy style of bringing governance down to the grassroots. This revolution is also ongoing in the other sectors of the Anambra economy via  his interventions on roads , mass empowerment programs etc .

Senator Ubah is particularly elated in celebrating Valentine with  Ndi Anambra, anchored on his love for his people and calls for more prayers , support and collaboration as he also reassures on his pact with the people never to let them down