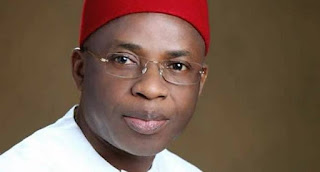 A former Governor of Imo State, Dr Ikedi Ohakim, was on Tuesday, 16th March, 2021 discharged and acquitted by a High Court of the Federal Capital Territory (FCT), Abuja, on a 3-count criminal charge entered against him by the Inspector-General of Police on a petition by Chinyere Amuchinwa Igwegbe.

Nigerian Notch on good authority has it,that the police authorities took the decision to discontinue the case after it discovered that the charge was a malicious act against Ohakim by Ms Amuchinwa due to a failed relationship, which went sour.

Recall,  that Ohakim’s Lawyer, Barrister Aloy Ejimakor had last September filed an action against investigating Ohakim based on the related petition by Ms Amuchinwa to Nigeria Police Force.

The discontinuance reads: ‘Take notice that the complainant discontinues all of the proceedings in this case against Dr Ikedi Ohakim with the consent of all the parties.’ Following the development, Ohakim was accordingly discharged and acquitted by the court and the charges struck out.

The Inspector-General of Police had in the said charge accused Ohakim of giving false information against the Chinyere Amuchienwa.

In the same vein, the National Agency for the Prohibition of Trafficking in Persons (NAPTIP) said the allegations of intimidation, emotional, verbal and psychological abuse made against Ohakim by the same Chinyere Amuchienwa cannot be substantiated, nor was the allegation of Ohakim receiving N500m from her. The position of the agency is contained in its preliminary investigation report it filed with the court in connection with discontinuing its own investigation prompted by Ms Amuchinwa.

The report signed by Moses Unongu has accordingly recommended that the case review committee should discontinue the case against Ohakim as there is no evidence to sustain the Ms Amuchinwa’s claims against Ohakim.