Nwajiuba calls for vigilance, to forestall kidnapping in schools. 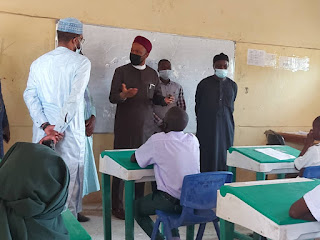 The minister of state for education, Hon. Chukwuemeka Nwajiuba has called for vigilance to help tackle the issue if increased rate of kidnapping of school children, especially in Northern Nigeria.

He made this call today, during a brief stop at the Federal Government College, Kiyawa, Jigawa state. He decried the incessant attacks on schools and kidnapping of students, which he described as worrisome.

The Honorable Minister, however called on members of the public, to be vigilant, as it is the collective responsibility of everyone to secure the lives of students in their domain.

He commended the men of Nigeria Security  & Civil Defence Corps and Police officers he met at the school for there proactive efforts to ensure that the teachers and students of the school are safe.

He said, " No man can come into a community and take away over 200 hundred students if the community is watchful enough to observe and report to appropriate authorities. It is no longer the sole responsibility of the government but also that of the citizens"