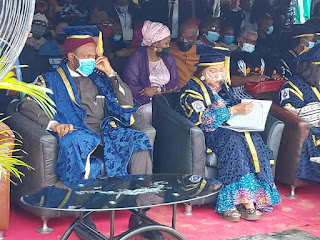 President Muhammad Buhari has once again called on administrators of Ivory Towers in the country, to be mindful of there basic role, which is to groom future leaders.

He made this call, at the 34th Convocation ceremony of the University of Calabar, in Cross River State. The president who was represented by the minister of state for Education, Hon. Chukwuemeka Nwajiuba,while delivering the visitor's address on behalf of President Muhammad Buhari, the honorable minister reminded the school management of their responsibility as a university, which is an instrument for the cultivation and grooming of the moral values that guide the trajectory to tomorrow's development.

He said that Ivory towers can't afford to underscore the moral imperative in there efforts to gain knowledge and confront the problems of the world.

Hon. Nwajiuba was joined by the Pro Chancellor of the university, Senator Nkechi Nwogu, Deputy Governor of Cross River State, Prof. Ivara Ejemot Esu, Deputy Governor of Kwara State, Kayode Alabi as well as the SSA to the President on Niger Delta Affairs, Senator Ita Enang, and other government officials, who graced the occasion.