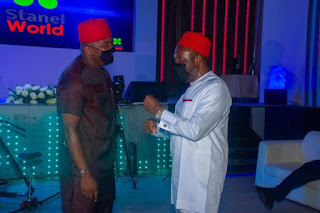 ... sues for peace and understanding*

Valentine Ozigbo, a frontline aspriant on the platform of the PDP in the November 6th 2021, gubernatorial election has sympathized with Prof Charles Soloudo on the unfortunate incident that befell him recently, while 3 police officers lost there lives.

In a press release made available to Nigerian Notch by Hon Valentine Ayika Esq. Director, Strategy and Media VCO Campaign Organisation, states that the news of the deadly attack on Wednesday, March 31, 2021 at an event where Professor Soludo was having a town hall meeting at his hometown, Isuofia, Anambra State came to them as a shock.

The release said that, according to media reports, the town hall meeting was invaded by gunmen and in the mayhem three policemen attached to Prof Soludo were killed.

Valentine Ozigbo on this note, condemned this act of violence, and prayed for the repose of the souls of the slain policemen, while extending their get well wishes to those that may have sustained injuries during the mayhem.

He also appealed for immediate and unconditional release of the Commissioner for Utility in the State, Engr Emeka Ezenwanne.

The Campaign Organisation however, admonished all concerned to always tow the part of peace and  opt for amicable or legal settlement of disputes.

"Let us remember that human life is and should remain inviolable at all times and for whatever reasons".