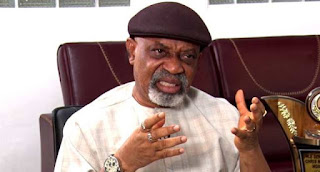 The Federal Government’s meeting with the Judicial Staff Union of Nigeria (JUSUN), and the Parliamentary Staff Association of Nigeria (PASAN), has been postponed.

The Minister of Labour and Employment, Sen. Chris Ngige, said this while addressing newsmen after members of the unions staged a workout from the meeting, slated for 3:00 p.m., on Tuesday in Abuja.

The News Agency of Nigeria (NAN), reports that the meeting between the Federal Government and the unions was called at the instance of the minister, following the industrial action embarked upon by the unions.

Ngige said the meeting was suspended to enable the Federal Government’s negotiating team harmonise all issues from the Memorandum of Understanding (MoU), reached at separate meetings with stakeholders.

“There is no point rushing to have a meeting that will be fruitless.

“The Judiciary, the governors’ forum, and even the Presidency are involved in this negotiation because the meeting held yesterday was at the Office of the Chief of Staff to the President.

“The arising documents are not yet properly harmonised. It will therefore not be fruitful to hold a negotiation where people speak from irreconcilable positions.

“The reason is to ensure that the agreement reached at the end of our meeting here is put into action, with timeline for implementation.

“So if we do not have a paper that is ready to go, then there will be no point for the talk shop,” Ngige explained.

He, however, noted that members of the unions were impatient even when they were properly informed that he would not take long, he would round up the meeting he was having with the government team.

The minister listed members of the government team to include the Solicitor General of the Federation, Mr Dayo Apata, the Director General of Nigerian Governors’ Forum, Asishana-Bayo Okauru and the Senior Special Assistant to the President, Sen. Ita Enang.

He, however, said the meeting would continue at a date to be announced soon.

“It is better done properly so that the governors can implement whatever agreement we enter into.

“The governors hold the ace because they are sovereign in their respective states, though they are sub-nationals, they run the government of those states,” he said.

The minister added that the Federal Government believed in autonomy, but utmost patriotism and tact had to be exercised in solving the issues in contention.

“Today, fund management committees have been proposed and there is also executive Order 10. This means there is a problem and we must be very careful not to create more problems instead of solving them,” he said.

Speaking with newsmen, JUSUN National Public Relations Officer, Mrs Koin Selepreye, said it was wrong for the minister to keep the workers for that long , when the invitation sent to them clearly stated that the meeting was for 3:00 p.m.

Selepreye said the union would always be available  for meetings , but would not take it when the time fixed for such meetings was not respected.

Also, the National President of PASAN, Mr Mohammed Usman, described the treatment meted out to members of the union as unfair.

Usman said the workers respected  time and would not accept being kept for a meeting which should be taken seriously,  considering the importance of the issues at hand.

NAN reports that in spite of efforts by the Permanent Secretary, Ministry of Labour and Employment, Dr Peter Yarfa and Enang to prevail on the unions to return for the meeting, they, however, declined.