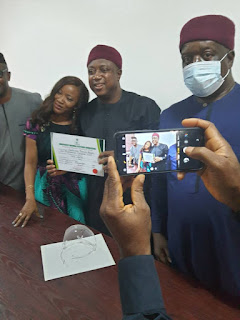 The Independent National Electoral Commission (INEC), today Apirl 23rd Friday, issued Sir Frank Ibezim with Certificate of Return, which has inturn brought an end to the prolonged political battle of sorts in Okigwe zone on who represents Imo North Senatorial District in the Ninth Senate.The Supreme Court, on Friday, April 16, affirmed Ibezim as the authentic candidate of the APC, the winning party in the December 5, by-election last year.

Sir Frank Ibezim and others have in the past months engaged in fierce legal battle with Sen. Ifeanyi Araraume on who takes the vacated seat at the Red Chamber by the late Sen. Ben Uwajimogu.

In what some pundits call frustration, the ruling of the apex court, did not debar Sen Araraume and his lawyers, who in a letter to INEC insisted that the former lawmaker should be issued certificate of return.

Ibezim’s ascension to the Red Chamber was saddled with loads of obstacles, with trumped up charges of certificate forgery. However, pundits say that his calm disposition, dogged fight and absolute trust in God was his strong points against the usual bragging from his traducers.