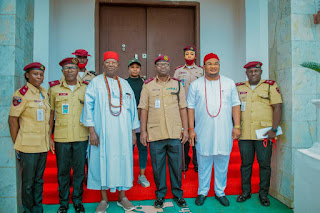 The Corps Commander and his Entourage were received upon arrival and ushered in, into the Imeobi of Dunukofia Palace by Ichie Sir Izuchukwu Nwabueze ( Ichie Chinemeze) Chairman Ukpo Ceremonies Committee and Principal Secretary to the Igwe. The Ceremony officially commenced with the opening prayer offered by Evang Chief Ikechukwu Okafor ( Asst. Sec Gen. UIU )

The Igwe formally welcomed the Corps Commander through the presentation of  traditional native kolanut presented on his behalf by Ichie G S Ukonmadu the Cabinet Chief of Protocol. In a welcome Address by the Igwe which was read on his behalf by his Principal Secretary Ichie Sir Izuchukwu Nwabueze and presented to the Corps Commander by the Deputy leader of Cabinet Business Ichie Emma Ogbuka, the Igwe congratulated him on his posting to serve in Anambra State Command as it's 14th Commander, thanked the Corps Marshall of the Federal Road safety Corps Dr. Boboye Oyeyemi MFR, for finding him Worthy to serve the good people of Anambra State as the 14th Corps Commander. While appluading him for his track record of service as adduced from his service records.

The Igwe urged him to do his best to ensure that  incidences of road accidents were reduced to it's bearest minimum and offered him his Royal blessings. Responding, CC Adeoye A. Irelewuyi thanked his Majesty and the good people of Ukpo Community for the warm reception accorded him.

He equally stated that he was delighted to visit the Kingdom as one of the foremost Kingdoms in Anambra State that have over the years been of immense support to the operations of the Federal Road safety Corps. He also informed his Majesty that the Corps had already launched an enlightenment programme to get the road users informed of the various safety precautions to apply especially during these Ember months season.

He particularly stressed on the peculiar dangers inherent in night travels. He assured his Majesty of his open doors to the Community even as he hopes to be more integrated into the customs and tradition of the Community in due course. The high point of the remarks of the Corps Commander was presentation of a gift to his Majesty-the King through the Assistant Corps Commander Egwuokike I Ikeh.

The Goodwill message of the Igwe In-council, Ukpo was delivered by Ichie Emma Ogbuka Deputy leader of Cabinet Business who collaborated the Igwe's Welcome Address and wish the Commander well in his Assignments. He assured him that the blessings that usually follow anyone that visits Dunukofia Palace will go with him. That at the end of his service in Anambra State that he will leave on promotion. The Goodwill message of Prince Engr Dr Arthur Eze, OFR (Ebube Ukpo,Ozoigbondu) was delivered by Ichie Sir Izuchukwu Nwabueze who informed the Corps Commander of the immense regards of Prince Engr Dr Arthur Eze for the Corps.

He equally emphasized the fact that the Corps Marshall Dr. Boboye Oyeyemi, MFR had on several occasions visited the Prince who in turn had given tremendous support to Federal Road safety Corps. He also in a special mention thanked the Anambra State Command for the services it usually render to the Community during the annual Ofala Festival. The Goodwill message of Ukpo Improvement Union was delivered by Evang Chief Ikechukwu Okafor Asst Secretary General who stood in, for the President general Chief Chukwuemeka Chukwuka who was unavoidably absent, thanked the Corps Commander for the Visit and appealed to him to put Ukpo in priority list whenever the Corps is carrying out recruitment/replacement excercise.

He joined the Igwe in assuring him of the Town's support whenever needed. In a appreciation of his visit, some gifts items were presented to him by Ichie Emma Ogbuka Deputy leader of Cabinet Business on behalf of the Igwe and Ukpo Community. The Royal Visitors Register was administered on the Commander by the Secretary of the Igwe In-council Ichie Nwachukwu Okonkwo (Ichie Ojiudo 11) for his Official Remarks.