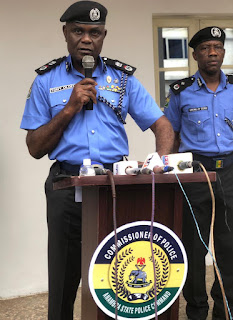 CP Tony Olofu has resumed as the 31st Anambra CP, replacing CP Christopher Owolabi who has been redpoyded to another police Command. In his address yesterday to the press, he said " It is my pleasure to address you today 16th September, 2021, as the 31st Commissioner of Police, Anambra State. "I give thanks to the Almighty God for his favour and mercies and the Inspector General of Police, *IGP Alkali Baba Usman, psc (+), fdc, NPM,* for finding me worthy to serve as the Commissioner of Police, Anambra State Police Command at this critical moment of our nation’s history."

He said that upon his assumption of duty within the last few days, he has been briefed on a number of security challenges the state is facing at the moment, which include armed robbery, kidnapping, cultism, dispute over land; kingship tussles, boundary issues, farmers/herders clashes, public disturbances, attack on unsuspecting members of the public, security personnel, government infrastructures and sundry offenses.

He however stressed that the command has been bold in confronting these challenges and indeed has recorded several successes in curbing some of these crimes. The new CP went further to stress that he has equally been briefed of the immense support by the Governor of Anambra, *His Excellency Chief Willie Obiano,* traditional rulers and other stakeholders in the state and appreciated them for supporting the Police in the noble course of enforcing  law and order.

The New commissioner of police said that In keeping with the vision of the Inspector General of Police, *IGP Alkali Baba Usman, psc (+), fdc, NPM,* to rejig and stabilize the security architecture, to be able to fully reclaim the public space across the country as well as maintain law and order, the Command he said under his watch shall take drastic measures in crime prevention across the state.

The CP stressed that the command will undertake  critical threat analysis, embark on painstaking intelligence gathering through strategic deployment of their intelligence assets, robust synergy with sister security agencies, organized vigilante groups and other stakeholders.

To this end, he said that the Command shall enhance crime fighting strategies that will be more proactive to dominate the public space and checkmate acts of criminality in the state.

"Alongside our strong resolve to fight all forms of violent crimes, the window of Alternative Dispute Resolution (ADR) and community policing principles where applicable, will be open for those desirous of taking advantage of such avenues to resolve specific problems and issues"

He maintained however that he is not unmindful of other challenges bordering on professional misconduct on the part of his officers and men such as extortion, unlawful detention and incivility to members of the public among others.

He however urged members of the public to promptly report erring officers to the Command for appropriate sanction as he is of the firm believe that every resident or visitor to Anambra State deserves to be treated decently in line with the policing principles handed down by the *IGP Alkali Baba Usman, Psc (+),fdc, NPM.*

"There is no doubt, that as members of the Fourth Estate of the Realm, you are critical partners  in the peace and security architecture of the state. Your primary role in communicating effectively and transparently to the general public, major incidents in our country confers on you the position of stakeholders."

CP Tony Olufo however stressed that how they manage this vital and sensitive role especially at this critical time when elections are approaching should weigh in favour of our national interest.

"I therefore count on your valuable support devoid of sentiments to be able to effectively police Anambra State". I

He extended his wish to hand of fellowship to the press and urged them to join hands with him in fighting acts of criminality in the state, especially by reporting security-related incidents in the most professional and objective manner.

"Anambra state is blessed with vibrant, energetic and enterprising people full of potentials".

"The potentials can only be fully realized in a peaceful, secured environment. I want to assure all *Ndi Anambra* that the Command will do everything possible professionally,  to achieve this."

He therefore urged the good people of Anambra State to remain law-abiding, vigilant and continue to partner and support the Police and other security agencies, as we synergize and collaborate towards combating all forms of criminality as well as ensure public security and safety in the state.

He also warned those who have been misled into crime, to retrace their steps as the command is poised to deal squarely with all acts of criminality without regard for status.

He also appealed to Ndi Anambra not to hesitate in reporting suspected criminals and their activities to the nearest police station or call the emergency numbers, *112 and 07039194332,*