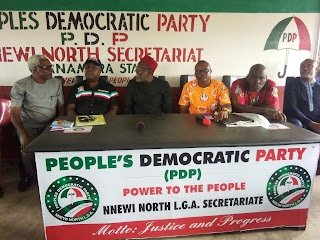 ..... Asks Ndigbo to stop the destruction of South East economy

Chief Olisa Metu, the former Publicity Secretary of the People's Democratic Party (PDP) has commended the South East Cacus in the National Assembly for their proactiveness in seeking for a lasting solution to the issues between the Leader of Indigenous People of Biafra (IPOB).

Chief Olisa Metu made this assertion yesterday while addressing PDP Party faithful in Nnewi North LGA of Anambra state. He said that it's heart warming that the cacus of Legislators from the South East has taken the bull by the horn by calling for lasting solutions to the problems of the South East and believes that very soon, the issues between the federal government and IPOB will be resolved.

He used the occasion to call for calm in the South East and pleaded on Ndigbo to avoid destroying the economy of the south East by incessant sit at home which has inversely affected the livelihood of people from the south East. " In the South East, we are known for being industralists. Our achievements,our houses, our business, our successes, are not due to any Goverment assistance but it's solely based on our individual struggles and hardwork as Ndi Igbo."

He said that unfortunately,these sit at home narratives has inadvertently negated the successes made so far by Ndi Igbo as the economy of the south East in the last few weeks has taken a downward slope, which is definitely not good for the people of the South East.

Chief Olisa Metu stressed that Ndigbo did not get to the stage they are today by fighting the system, or by injuring the businesses of others, but rather through hardwork and cohesion, which has been the Hallmark of Ndigbo. He therefore appealed to the people of the south East to wait for the outcome of the mediation that has started with the South East cacus of Legislators, which he said will be fruitful in the long run.

Chief Olisa Metu however advised party faithful to always ensure that they do away with Politics of bitterness which has not benefited anyone. He promised to support the candidature of Valentine Chineto Ozigbo towards becoming the next governor of Anambra state, under the platform of the PDP and enjoined party faithful and Anambrains to join forces towards enthroning PDP at this year's Anambra gubernatorial Election.

In his speech, the local government Chairman of PDP in Nnewi North, Chief Nonso Amamchukwu extolled the noble strides of Chief Olisa Metu and his support towards PDP in the LGA. He thanked him for supporting the party in the LGA towards getting a biffitig office accomodation and promised to ensure that PDP wins Nnewi North in the upcoming gubernatorial election in the state.