Dr. Okey Chidolue, All Progressives Grand Alliance, APGA, aspirant for Anambra South senatorial election held on October 3, 2018, at Ekwulobia, Aguata LGA, has urged APGA to do the needful by forwarding his name to Independent National Electoral Commission, INEC, as the authentic candidate of the party in Anambra South, or forget about having a senatorial candidate  for the 2019 general election in Anambra  South, while also commending the judiciary for standing firm on the path of justice.
Dr Chidolue, made this known at an interactive media chat,with newsmen at his country home in Nnewi yesterday.

He stressed that majority of APGA delegates to the primary were embittered at the injustice and impunity that characterised the said primaries and wondered where the person, who claimed victory at the election would have gotten his votes from,aside from the statutory list for the primary election.

According to him, "before and during the primary election,  APGA refused to produce, list of delegates for the exercise for aspirants to know who they were dealing with.

" We persuaded APGA to tender the delegate list they used for the conduct of the election that gave Ukachukwu victory, but they could not produce it. He went further to state, that Hon. Ikenna Mbazulike was even captured on camera asking for the delegate list, which APGA officials refused to give them.

"That was one of the evidences the learned Judge relied on in giving his judgement. Besides, after the primaries on October 3, the party issued Certificate of Return to Ukachukwu immediately; without waiting for the Appeal arising from the primary which was scheduled for October 5, before issuing the certificate.
He said however, that the Honorable Court also relied on this point in giving its judgement; because, the court held that in doing so, the party had a predetermined winner/ candidate."

Dr. Chidolue further  opined that the irregularities noticed during the primary was so evident that he approached the court to challenge the "impunity and injustice ".

He further commended the FCT High Court under Justice Valentine Achi for standing on the path of justice, stating that "this is the first time party impunity is challenged successfully."

The FCT Federal High Court under Justice Valentine Achi, had on Thursday, December 13, nullified the Anambra South senatorial election held on October 3, for alleged irregularities; while parties involved were directed to go to INEC to sort themselves out, with all ears still on ground to know  the next steps they will follow.
Grapevine sources have it, that Prince Nicholas Ukachukwu is proceeding to the Appeal Court to challenge the High Court ruling, which to many is going to be a mother of all dramas and intrigues. We may not have heard the last of this unfolding and interesting issue, as it concerns who finally emerges the Candidate of APGA for Anambra South Senatorial Zone for the 2019 general election. 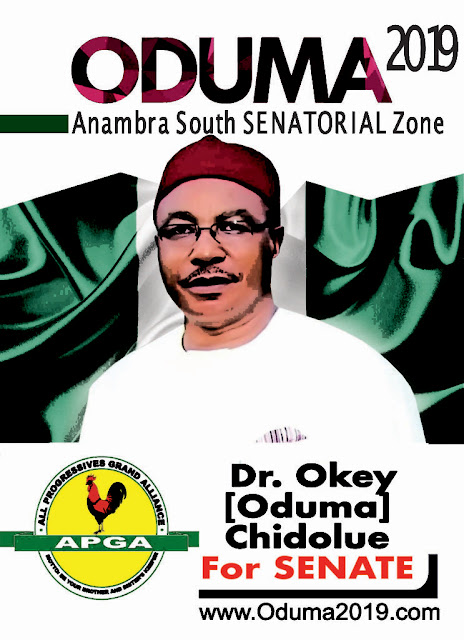