It was a mecca of sorts yesterday, as Okwudili Ezenwankwo foundation held the 12th anniversary of its youth empowerment and poverty alleviation program at his country home in Nnaka.
The event kick-started at about 9Am with athletic competition with members of various age grades,competing at Holy Trinity Parish field Nkwo Agu Nanka, before moving to Oka Agbiligba Hall for the empowerment and poverty alleviation program.

Speaking at the occasion, the President of the Foundation Chief Dr Ezenwankwo Okwudili (Ikemba Orumba)  the APGA House of representatives candidate for Orumba North and South Federal Constituency for the 2019 General election thanked God for seeing him through in the journey of life.
He welcomed his guests from across his constituency for finding time to grace the occasion, while calling for their unalloyed support to him in the fort coming election. He assured them of the dividends of democracy based on the fact that he has the capacity and what it takes to deliver the dividends of democracy in Orumba North & South.

While speaking with newsmen, Chief Ezenwankwo stressed that the reason his foundation will continue to grow from strength to strength, is because it is grassroots oriented which will help touch more lives, at the grassroots.

He recounted that the foundation over the years has built 8 houses,  sank boreholes, built a civic centre,  renovated existing civic centre, has given scholarships to over 200 youths, and provided succour to over 1000 widows.
Continuing he said that he has handed over 40 motorcycles to the less privileged and many more.

The high point of  this event was the distribution of over 1000 bags of rice,  1000 pairs of sandals,  500 wrappers, 350 cartons of Noddles, 24 deep freezers, 15 motorcycles, and cash  to widows, less privileged and party members drawn from all the wards in Orumba North and South Federal Constituency.

The presentation of gift items for the winners of Athletic competition was  officiated by the Vice president of the foundation, Lolo Obiageli Ezenwankwo, with fun and fan fare 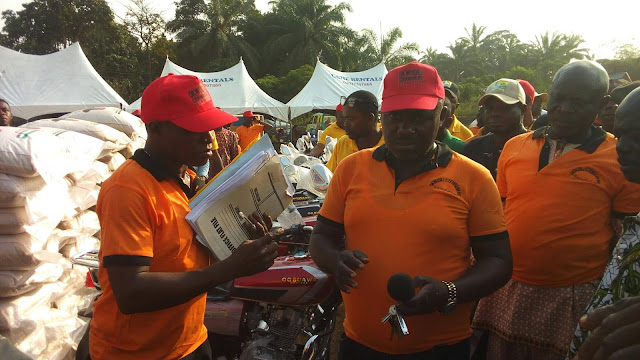