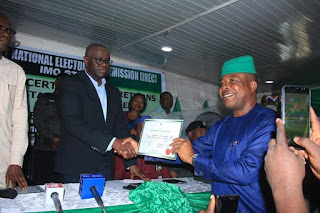 Imo State Governor-elect, Rt. Hon. Emeka Ihedioha is due to announce a transition committee to set agenda for his administration which begins on May 29, 2019.
Nigerian Notch, authoritatively learnt from a very reliable inner source that a former Deputy Governor, Policy and Corporate Services at the Central Bank of Nigeria from 1999 to 2009, Mr. Ernest Ebi would lead the committee which may be announced later today.
Mr. Ebi currently serves as an Independent Director at Coronation Capital Mauritius Limited as well as, Member of the Governing Board of Venture Garden Nigeria. He is a Non-Executive Director of Dangote Cement Plc since January 30, 2014, and had worked in various departments of International Merchant Bank in Lagos before he went to the CBN.