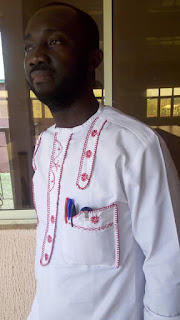 Today, being Thursday, March 28, 2019, a professional colleague, Christian Chukwuemeka Nwannedimma, who is known in the pen profession as Odogwu Emeka Odogwu, turns 42 years.

Coincidentally too, Odogwu is marking his 20th year as a professional journalist, having delved into the profession in March, 1999.

From inception, Odogwu planned his journey into journalism, and followed his dreams religiously by acquiring requisite educational qualifications and trainings.

Odogwu started journalism in 1999, some 20 years ago, as a Freelance journalist with the Anambra State Broadcasting Service, Awka. From that humble begging, he rose to occupy enviable positions and garnered requisite experiences in the profession.

He had occupied numerous positions in the print media, where he curved a niche for himself.

He held other enviable positions such as Editor, Special Projects, (Consultant) Vanguard Newspapers, 2018; and Regional Editor, South-East, The Leadership Newspapers, February, 2018. He had also worked as correspondent for the Champion Newspapers and The Nation Newspapers at different times. He is also the owner/Admin, odogwublog.com.

Odogwu had gotten commendations severally from his professional colleagues and some organizations. In 2016, The Authority Newspaper, honoured him as an Exceptional Correspondent. Some years back also, B-Marshal Computer Institute, Oko, Anambra State, also honoured him for his marketing prowess and dynamics.

Also, one Emeka Onwudinjo of the Public Relations Unit, FCE (T) Umunze, once described Odogwu as an "amazing mentor full of inspiration and encouragement." He also described Odogwu as a "generous fellow, always willing to assistant other people to achieve their set goals."

Sometimes in 2016, I met a colleague, who was deployed from Abuja to Awka as correspondent of Daily Trust. He was at a newsstand at the Aroma Junction, Awka, and introduced himself as a journalist. He told me and other colleagues there that his editor directed him to meet one Odogwu Emeka Odogwu in Awka. The young man said his editor told him that Mr. Odogwu would be very disposed to direct and assist him carryout his duties as a journalist in Anambra.

He also helped many upcoming journalists to find their grounds in the profession within Anambra State and beyond.

Odogwu is not only an accomplished newsman but also a fulfilled family man; a caring father and a loving husband. He is blessed with a beautiful wife, three kids and a foster child.

In this occasion of your 42nd birthday and 20th year in the pen procession, I want to join all people of goodwill wish you all the best in life.