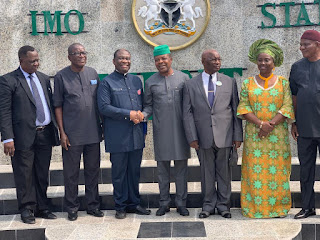 The governor disclosed this in a press release made available to newsmen today. He said that his administration would not lend itself to the “whims and caprices of personal discretion”, noting that the, “greater good of the people of the state, would at all times take priority position”.

This is as he disclosed plans to upgrade the General Hospitals in Orlu, Okigwe, Aboh Mbaise and Awo Omamma Council areas into the status of specialist hospitals in specific areas of medical specialization.

The Governor stated this at the inauguration of the visitation panels to Imo State University, Imo State Teaching Hospital, Imo State Polytechnic and the Board Imo State Hospitals Management, held at Expanded Executive Council Chambers, Government House, Owerri on Wednesday.

He said the constitution of the panels were neither to probe nor witch-hunt anybody but a necessity to enhance the quality of education and health care delivery as well as ensure overall growth and development of the state.

He said, "at the inception of this administration, we were inundated with plethora of complaints on education sector in the state, especially at the tertiary level. And as a responsive government, we felt that we would be abdicating our obligation to the people, if we do not look into these complaints.

“For these reasons, we deemed it necessary to respond to these hues and cries by looking into the operations of these critical institutions."

He continued, “the setting up of these Institutions' Visitation Panels is in furtherance of our mission to rebuild our educational institutions. By these, we hope to achieve effective governance institutions as well as strengthen educational services delivery and processes in these tertiary institutions.Today, therefore, we are inaugurating the visitation panels to these Imo State flagship institutions of higher learning to salvage them from sliding down the precipice of total collapse."

On the choice of non indigenes as members of the Visitation Panels, the governor said, “we had to go outside the state to choose some members. This is with a view to ensuring impartiality in the considerations of the issues that would be brought before them”.

Governor Ihedioha pointed out that the terms of reference of the panels include, "to identify the strength and problems of the institutions and make appropriate recommendations to the visitor; ascertain the operations of various departments and units; look into cases of procurement and complaints bordering on cliqueism and cultism in the institutions; investigate students' complaints on various issues as well as conduct internal audits on institutions' finances."

On the Hospitals Management Board, the governor said, “the health sector was not spared the pervasive rot, hence the need to constitute the board to carry out intended reforms, with a view to ensuring peak performance at the various state owned health institutions”.

“Upon assumption of office, we brought to Imolites a report on the state of affairs in our institutions and agencies. For instance, of the 19 General Hospitals under Imo State network of health services, only 10 were still in operation. Of these 10, only 4 were offering reasonable services. All of them were suffering from lack of modern hospital equipment, moribund processes and demoralized staff.

“Consequently, in the Budget for next year, we have in focus the complete overhaul of all these health institutions. The four General hospitals in Orlu, Okigwe, Aboh Mbaise and Awo Omamma (Oru East LGA), would be upgraded into the status of specialist hospitals in specific areas of specialization.”

He described as “noble and revered personalities”, members of the panels and expressed confidence that they would bring their wealth of experience and expertise to bear on their assignments without fear or favour for the good of the state.

Responding, Chairman off the Hospitals Management Board and former Deputy Governor of Imo State, Dr. Douglas Acholonu, who spoke on behalf of the members of his board, thanked the governor for the confidence reposed in them to serve and promised that they will “discharge their duties with a high sense of responsibility”.

In his response on behalf of the Visitation Panels, Prof. Chinedu Nebo said, “we will not disappoint the people of Imo State on this assignment. We will do our best and as the governor has said, it is neither a probe nor a witch-hunt but for the overall good of the people.

Prof. Nebo, a former Vice Chancellor of the University of Nigeria and former Minister for Power and Energy further disclosed that Governor Ihedioha is on the right track towards fixing the various critical institutions of the state