Ikeduru to generate over N10M from cash crops in 2020, says Council Boss 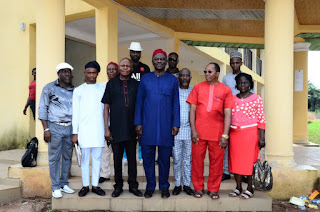 The Interim Management Committee chairman of Ikeduru Local Government Area (LGA) of Imo State, Anselam Opara, has said that the LGA will generate around Ten Million Naria (10,000,000) from cash crops in one year.

The Chairman stated this while addressing some select journalists in his office at the council headquarter in Iho, recently.

He said that in line with the Agro initiative of the state governor, Emeka Ihedioha, the LGA under his watch had embarked on cash crop and poultry farming.

He said the agro revenue will increase in subsequent years.

The Council boss announced that in a short while, Ikeduru LGA will produce Tomatoes, Cucumber, Lettuce, pepper, egg, et al, for commercial purposes.

The Chairman noted that the investment on Agro-industry will boost the Internally Generated Revenue (1GR) of the LGA and create job opportunities for the people of Ikeduru.

He added that the Agro-industry will empower the beneficiaries of the state government's sponsored agricultural training in Nassarawa who are from the LGA.

Opara also disclosed that the LGA had embarked on free medical outreach and ensured that over four hundred persons in the LGA got access to free diagnosis and drugs.

The Chairman stated that within the short term in office, electricity bill owed by his predecessor had been offset for the smooth running of the LGA and comfort of the staff.

Opara disclosed that the LGA has paid for truck, bulldozer, payloader and caterpillar to fix rural roads in Ikeduru.

He said it was cheaper to have the equipments and employ skilled personnel to operate the machines than awarding the contracts to construction companies.

The council chief said the LGA has begun massive renovation of public schools and equipping of health centres in Ikeduru. He noted that since his inception, the LGA has paid salary upto date.

While appreciating the clock in, clock out initiative of the state government, Opara said his administration had zero tolerance  for corruption.