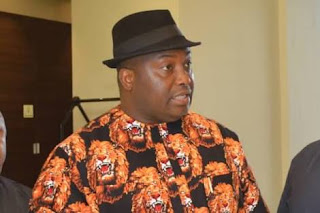 The Senate on Wednesday, resolved to look into the complaints by the South East Amalgamated Market Traders Association (SEAMATA) over delayed cargo and imposition of excessive charges on their containers by PIL Shipping Company, a shipping agency with operational base in Port Harcourt, Rivers State.

The Senate resolution was adopted because of the comprehensive motion, on the urgent need to rescue, South East Amalgamated Traders Association businesses from total collapse, by the uncomplimentary attitude of PIL Shipping Agency, moved under Order 43 by the Senator representing Anambra South, Senatorial District Senator Dr. Patrick Ifeanyi Ubah on tuesday July 7, 2020.

While moving the Motion, Senator Dr Patrick Ifeanyi Ubah informed the Senate on the excruciating pains and extortion suffered by SEAMATA in the hands of PIL Shipping agency entrusted with the task of delivering their containers from China to Nigerian Ports.

Senator Ubah further emphasized, that SEAMATA is an umbrella union of traders in all the markets in the Southeast geo-political zone and traders of South East extraction doing business across the federation have been the victims of this orchestrated plot to destabilize their businesses.

The Senator noted, that some of their members who happen to be his constituents are suffering excruciating pains and anguish from shipping companies especially PIL.

The Anambra South Senator further expressed concern over the fact that SEAMATA members in December 2019 and January 2020, entrusted their cargoes and containers from China to PIL for delivery to ports in Nigeria, but its however unfortunate that the cargoes, which were supposed to be delivered at their ports of destination on or before February 15, 2020, have not been delivered till date, as some of them are yet to arrive Nigerian ports.

He lamented that all enquiries and appeals to PIL were greeted with empty and failed promises of new arrival dates, the Senator stated that four vessels, namely KOTA SALAM, KOTA SATRIA, KOTA SURIA, and KOTO SINGA all have their members’ cargoes aboard, and out of these four vessels, only KOTA SINGA and KOTA SATRIA arrived some weeks ago after about six and seven months respectively.

He also reminded the Senate that most of SEAMATA members’ cargoes aboard these vessels were funded with loans and overdrafts raised from banks with interests on them growing in geometrical progression, and that presently, some banks have placed the homes of some of these importers which they used as collateral for sale.

Retrospectively, the Anambra South Senator noted that the consequences of these development is taking a huge toll on the health of these importers as most of them are now battling with severe depression, hypertension and other related illnesses, with their businesses dying gradually as a result of the ineptitude of PIL and other shipping lines.

Reacting to Senator Ubah’s Motion, the Senate today resolved to mandate the Senate Committee on Marine Transport to investigate the activities of the shipping lines in the country especially PIL and report back in two weeks.