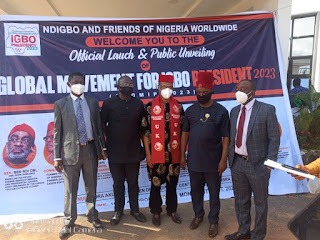 A group known as Global Movement for Igbo President 2023, yesterday in Awka, Anambra state capital maintained that there is no going back on the project to ensure that the presidency of Nigeria come 2023 will be an personality from Igbo extraction.

While leading the pack of prominent personalities of Igbo extraction yesterday, the former Governor of Anambra state Dr Chukwuemeka Ezeife, called on Igbos to unite for the actualisation of a President of Igbo extraction.

He said that the clamour for an Igbo President come 2023 can only be realised when other zones in the country support the project, hence the need to lend out a hand of fellowship to them, while stressing that a President from Igbo extraction is long overdue.

He hinted that “Power is taken,  and rather not given. In his words he said that "we shall send our Steering Committee members to Bola Tinubu and Northern aspirants to see reason why Igbo's should produce president and have a rethink."

Senator Ben Obi, a prominent member of the PDP and an Igbo frontline politician stressed that  for Igbo Presidency to be realised come 2023, the two major political parties, of APC and PDP, must zone their presidential tickets to the South East zone and allow Nigerians choose from whoever they want.

“After reaching out to other zones, the next hurdle would be the political parties that have the constitutional right to sponsor people for the elections.

“Mobilising our people to be on the same page and speak with one voice on the sole project rather than having different demands and agitations outside the call for an Igbo President, so that we shall not be looked upon as a confused people.”

Adding her voice to the discuss, the Former Minister of Women Affairs, Iyom Josephine Anenih, regretted the verbal utterances of some Igbo's towards their quest for the number one seat in the country.

She averred that former President Olusegun Obasanjo won presidential election in 1999, because Nigerians decided to compensate the Yoruba for late Abiola’s loss, insisting that such should be the case with the Igbos.

In her words, She said: “I’ve been discouraged by the Ndigbo through their pessimistic utterances. I feel disappointed when I hear them ask questions like, ‘Will they give us?’

“When Nigerians realised the injustice they meted on Abiola, they decided to vote for Obasanjo. He was not voted for by his people. He won because Nigerians wanted to appease the Yoruba.

“If Igbos like it or not, a President will be imposed on them. An agreement by all Nigerians will make it possible.

“I trust Nigeria to give us the slot to appease us. We're not talking of secession now, but injustice.”

Speaking on the theme, “Actualising Nigeria’s Igbo Presidency”, the convener of GLOMIP Comrade Iyere, said the hunger for a President of Igbo extraction is a global project which will be presented to the British and European Union parliaments as well as government agencies all over the world.

Iyere maintained that only a President of Igbo extraction can rewrite the wrong in the Nigerian nation and help steer the nation’s economy in the proper direction.