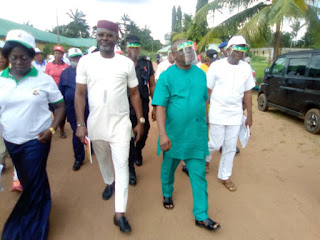 Chief Akagburuonye has sent a Save Our Souls(SOS) message to the Federal Government for an immediate repair of the road of the Mgbidi Onitsha express road to reduce the sufferings of motorists in the state and adjoining states.

Akalgburuonye who's popularly known as Akara Ugo made this Clarion call at Omuma, the headquarters of Oru East local Government area in Imo State during inauguration of the council area leadership of Onwa Grassroot Mobilisers for Good Governance of which he is the State Patron.

He pointed out that the road is very crucial in the nation's transformational and developmental agendas lamenting how he,  his entourage and other Nigerians were stocked up for hours at the bad spot which is not up to a kilometer and eventually the lorry carrying the palliatives he intended to personally share at the occasion to the down trodden in the area were trapped as they managed to rescue just  few of the items, informing that efforts are being made to recover and bring down the remaining items.

The Patron re-emphasised that the group is not in the business of playing  politics but rather an architect in the crusade for good and purposeful governance in Imo State, noting that politicians, should tell the populace what they want to hear while the group is committed in  championing things that are for the overall interest of the masses.

He quoted Psalm115 Vs 3, which says"our God is in heaven, He does whatever that pleases Him" and similarly, the book of Jeremiah 32 Vs 27 that says "am the Lord, the God of all flesh, is there anything too hard for me ?" Justifying that the mandate of Governor Hope Uzodimma of Imo State is divinely driven and advised the populace to give him all the maximum support and cooperation.

Akagburuonye also informed that all activities of the group is being sponsored based on personal efforts of members stressing their commitments in changing the narratives of dependence on government and also applauding Governor Uzodimma for his philanthropic nature and compassion.

He emphatically stated that members of the group are  equally not interested in jostling for position (s) or  any political appointment, instructing that the food and wrapper palliatives which he brought as part of his philanthropic gifts should be shared among the council's ten INEC wards.

Earlier in her welcome address, Mrs. Chika  Anigbogu, the newly sworn in Coordinator of Onwa Grassroot Mobilisers for Good Governance expressed gratitude to Governor Hope Uzodimma and Barr. Success Akagburuonye for their labour of love to Imolites and assured them of God's abundant blessings.

Anigbogu further applauded Governor Uzodimma for his Shared Prosperity mantra administration and his 3R agenda that anchors on Reconstruction, Recovery and Rehabilitation of the State.

While reassuring of their commitment in supporting the visionary and purposeful governance of Governor Uzodimma they also commended the Governor for his welfare oriented programmes to Imo State workers and pensioners despite the Covid - 19 pandemic.

Responding, the Director General of the group Hon. Livinus Okoro, charged the newly inaugurated Council's executives to live up to the tenets of the organization.

Okoro assured them of his leadership support at all times  and charged them to plant the group in all the ten wards that constituted the council area.